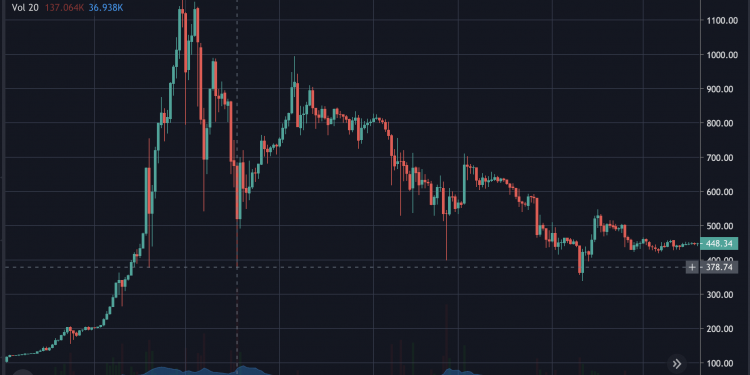 Bitcoin’s price had reached all time high after a surging November, surpassing $1,000 in what at the time felt like the moon.

The currency had nearly 10xed, opening November at $198, closing it at about $1,200 as China learned about bitcoin.

As it happened, that was the initial bottom with a drunk bitcoiner seemingly encapsulating what many were thinking under the title of I AM HODLING on December 18th 2013:

“I type d that tyitle twice because I knew it was wrong the first time.  Still wrong.  w/e.  GF’s out at a lesbian bar, BTC crashing WHY AM I HOLDING? I’LL TELL YOU WHY.  It’s because I’m a bad trader and I KNOW I’M A BAD TRADER.  Yeah you good traders can spot the highs and the lows pit pat piffy wing wong wang just like that and make a millino bucks sure no problem bro.  Likewise the weak hands are like OH NO IT’S GOING DOWN I’M GONNA SELL he he he and then they’re like OH GOD MY ASSHOLE when the SMART traders who KNOW WHAT THE FUCK THEY’RE DOING buy back in but you know what?  I’m not part of that group.  When the traders buy back in I’m already part of the market capital so GUESS WHO YOU’RE CHEATING day traders NOT ME~!  Those taunt threads saying “OHH YOU SHOULD HAVE SOLD” YEAH NO SHIT.  NO SHIT I SHOULD HAVE SOLD.  I SHOULD HAVE SOLD MOMENTS BEFORE EVERY SELL AND BOUGHT MOMENTS BEFORE EVERY BUY BUT YOU KNOW WHAT NOT EVERYBODY IS AS COOL AS YOU.  You only sell in a bear market if you are a good day trader or an illusioned noob.  The people inbetween hold.  In a zero-sum game such as this, traders can only take your money if you sell.

As it happened this holder was to face a pretty hard 2014, but a hopeful 2014 as merchants in some ways came to bitcoin’s rescue.

During the summer of that year, bitcoin saw one of its biggest rise as PayPal’s Braintree accepted it for something.

No one had heard of Braintree, but the bulls and bears were in battle, and the bulls lost.

The holder had called a temporary bottom, but none other than Tim Draper had joined him in announcing himself as a bitcoiner after being introduced to it by his son.

The bulls cheered at that PayPal jump, saying Draper had doubled his money, but MT Gox had just gone under and some 200,000 silkroad coins were to be auctioned.

The bearwhale was at the beginning of this picture on the 5th of October. You can see that big red candle beaten by bulls.

That’s a legend of its own, with bitcoin slightly roaring as bulls ridiculed the bearwhale selling some 10,000 BTC at $300 at market limit on Bitstamp, but as can be seen it went lower to the actual bottom at the beginning of 2015.

A 2015 that is only memorable in as far as at that point everyone truly stopped caring about price.

This itself has now become a meme with some guy full of gold necklaces saying he is in for the tech, but in 2015 people really didn’t care if bitcoin fell to $10 or rose to $1,000.

Bitcoin was new money to them, something to get merchants to accept, a decentralized global new tech, and something that needed to scale.

You can see the little bump there as badly bitten bulls try hope during summer 2015, but bitcoin tries another bottom.

Then we have the beginning of a bull market as bitcoiners turn on each other regarding scalability with debates and conferences going on and on while price rises, to the care of no one.

The more intense the debate got, the more price rose, and then ‘suddenly’ this thing is at $3,000.

It isn’t known whether this holder did really hodl, but if he did, he would have been up by 100x in two years.

Draper hodled, and more so. He bought some of the silkroad coins. A fool, plenty said at the time. Now his son goes around investing in all the cool defi dapps.

In addition this meme is more than a misspelling. Quite a bit more. Due to the very limited supply of bitcoin, the act of selling is adding supply. Holding on the other hand creates a sell-side liquidity crisis.

Not instantly and not necessarily always, if for example there is a complete loss of confidence. Moreover the past doesn’t predict the future, it just provides data for it. But presuming a certain level of demand, then the only other part of the equation is supply, and the latter is something bitcoin holders can control by holding.

Also, it is a rite of initiation to lose quite a bit of money trying to pick the tops and bottoms, especially now when you’re playing against quants, but even then.

He probably experienced that himself and figured out he loses more by trading, and maybe even loses all his money, than by just holding and waiting.

Even today there are academic papers trying to discern how much of that is true. The answer is probably that there is no answer because it just depends on so many factors that thus can’t be subject to a single answer. Except perhaps that so far the holder has been right.

As this cycle seemingly repeats, it remains to be seen whether he will continue to be right, but bankers want your bitcoin now with it your choice whether you want to give it to them like your grandpas gave them some 80% of all the gold.