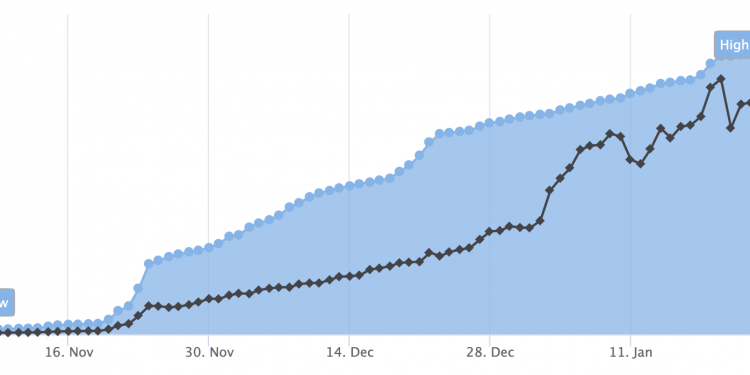 The sum has gradually increased as can be seen above just weeks after it launched on December the first.

The managed staking service by Kraken remains one of the biggest depositor, but there is now competition from smart contract based staking.

Lido just launched recently with it basically binding staked eth to an stETH token that can freely be used. They say:

As a user’s staked ETH generates staking rewards from ETH 2.0, the user’s ETH balance on the beacon chain will increase. stETH balances will update correspondingly once per day allowing you to access on ETH 1.0 the value of your staking rewards received on ETH 2.0.

Users can use stETH in all of the same ways that they can use ETH: sell it, spend it and, since it is compatible to be used in DeFi, use it as collateral for on-chain lending. When transactions are enabled on ETH 2.0, users can also redeem stETH for ETH.”

This service therefore allows you to earn the nearly 10% staking yield while at the same time being able to even sell your staked eth, which tends to be at a discount.

Or you can use that eth for collateral with a new Yearn strategy doing just that where you can stake the staked eth on Curve to earn Lido (LDO) tokens as well as CRV.

Thus effectively compounding your gains as you get to earn both the 10% staking yield as well as CRV and LDO tokens.

Lido claims close to 100,000 eth has been staked with them so far, worth $127 million, with this platform going out just this month.

The amount of staked eth therefore will probably continue to increase as now you don’t even necessarily have an opportunity cost due to tokenization liquifying the locked stake.