Bitcoin and Ethereum Keep Growing on the Stock Market 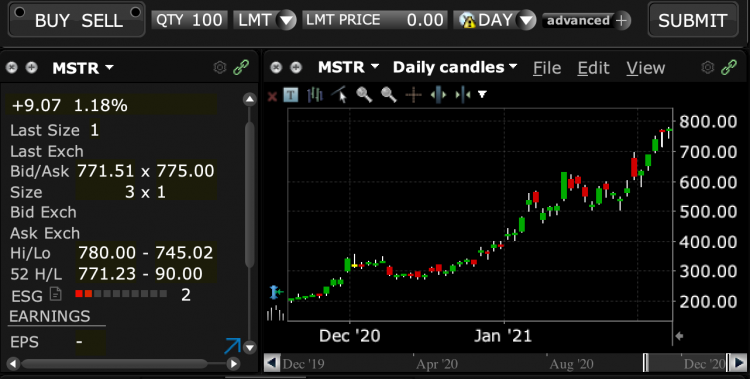 The options to play bitcoin and ethereum on the stock market are constantly growing with numerous companies now available on the 90s designed terminals.

Besides numerous ETFs and trusts, there are now also miners and at least one exchange we’ve found.

The biggest one is of course MicroStrategy (MSTR), which bought one billion worth of bitcoin.

This is now not far off from 10x-ing since summer, nearing $800, with much of it due to their bitcoin holdings.

Then you have the miners. Riot Blockchain (NASDAQ: RIOT) is one of the biggest with $1.6 billion in market cap and a volatile price that has now reached $23.80, far from the all time high of $46 in December 2017.

Argo Blockchain (ARB) has a smaller market cap of $350 million and seems to have 10x-ed since this December.

While Marathon (MARA) has a $2.17 billion market cap and seems to be significantly expanding with a recent asics purchase expected to give them 10 exahashes per second in bitcoin mining.

This seems to somewhat closely follow bitcoin’s price not least because they bought $150 million worth of bitcoin recently for their treasury reserves.

Another miner that has done a similar thing, though at a far smaller scale because it is far smaller, is Digihost Technology Inc (TSXV: DGHI).

They announced in a recent press release an increase in their bitcoin holdings by 33.7 BTC as of January 31, 2021.

Their market cap is currently $31 million, which is just 3x their revenue presuming it stays at circa 34 bitcoin a month, making it somewhat undervalued.

They’re just one of these small cap miners with quite a few of them listed above, although CXI is unrelated as far as we can tell with the above list being from Reuter’s peer companies.

Mogo (TSX:Mogo) is somewhat related however, but it’s not a miner. Instead this is a Canadian bitcoin exchange app that also offers more traditional loans and even mortgages.

They recently announced a 300% growth in bitcoin transactions for January, and in addition appear to be expanding to Japan.

Their market cap is $214 million on revenues of $45 million, with this being the only stock listed bitcoin exchange as far as we are aware.

On a similar note, there doesn’t seem to be much for eth either, with plenty of ETNs but no company that has added them to their reserves as far as we know.

Mogo seems to only have bitcoin as well, even a bitcoin reward card, but no eth and there are no eth miners either, understandably as they’re going to be replaced by stakers.

We did find a staker however, Ether Capital Corp (ETHC) which recently announced they were to stake eth.

They currently hold 32,407 eth and 2,300 MKR in addition to a $2 million investment in Wyre Inc, which is a crypto exchange.

Their market cap is 86.8 million in Canadian dollars, just a bit above their asset value of C$82 million.

Interestingly here there are dividends, but not in the traditional sense, as they get returns on staking.

That staking amount is small however, just 32 eth for now, but they say they will increase it as they become more confident in the network’s performance.

They claim to also play yield farming, making it an interesting stock as ethereum starts making its way to the traditional market.

These are just some that we could find, it is probable we’ve missed a lot, so please feel free to comment below to let us know of any interesting ones as well as what you think of the ones above.