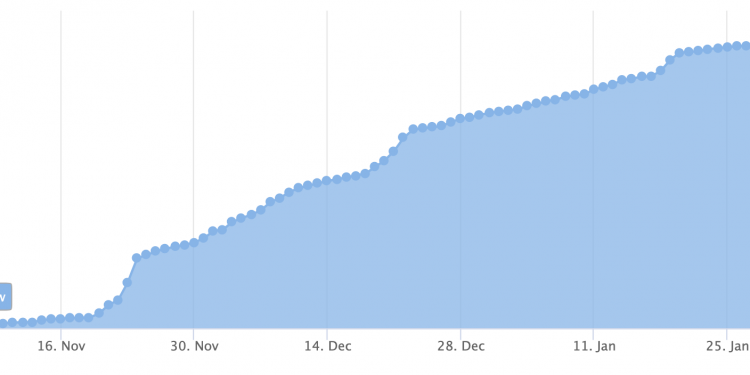 More than 3 million eth has been deposited to stake on ethereum 2.0, surpassing about 3% of the total supply for the first time.

Some $5.3 billion is now securing the new Proof of Stake network, more than for any other blockchain.

In addition validators have reached an all time high of 85,000, but there remains a lack of data on what node clients they are running.

Something very important because no client should have more than 30% of the share, but there have been suggestions Prysm has 50%.

Nonetheless, the network has been operating without a hitch so far, with epochs finalizing at a participation rate of more than 99%.

This Proof of Stake network is not doing much currently but validating the Proof of Work block headers.

That is set to change once the current ethereum network merges with eth 2.0 perhaps sometime next year once the difficulty bomb kicks in.

Until then the deposited eth can’t be withdrawn, meaning they’re effectively taken out of circulation and so have practically reduced total supply until it is unlocked with the merger.

Once it is unlocked, the Proof of Work miners will no longer participate as ethereum will become full Proof of Stake with validation no longer carried out by GPUs, but by the stake of 32 eth.

The inflation rate from block rewards therefore will reduce considerably by some 80%, with eth having a variable yearly inflation rate depending on how many stake, but unlikely for it to be more than 1% as opposed to the current 4%.

The surpassing of this 3 million milestone in just as many months now probably kicks in opportunity cost calculations as potentially one could earn higher yield by defi lending and borrowing the eth.

However solutions like Lido, which tokenizes the staked eth to give you a 1:1 pegged seth, can potentially allow you to both have your cake and eat it too.

So the amount of staked eth may increase further as the reward remains considerable at 9% a year in eth.