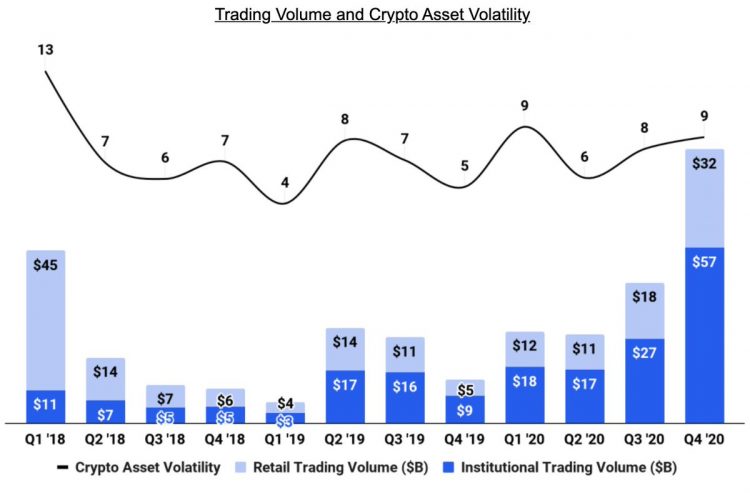 They do not name the institutions, with Coinbase stating they have “efficiently executed nine and ten figure trades for some of the largest institutions in the world.”

The Silicon Valley based exchange has now filed for direct listing on Nasdaq under the ticker of Coin. In it, they say:

“Since inception through December 31, 2020, we generated over $3.4 billion in total revenue, largely from transaction fees that we earn from volume-based trades on our platform by retail users and institutions.

For the year ended December 31, 2020, transaction revenue represented over 96% of our net revenue…

That’s a 7 fold increase in institutions buying bitcoin, much of it over last year with Coinbase stating “we observed institutions invest in Bitcoin as a hedge against inflation at an accelerated rate.”

This will be the biggest crypto related listing in history with it to be through a direct listing, meaning no new shares will be offered to the public but current shareholders will be able to publicly sell.

Their revelation of 43 million users is quite interesting because it indicates huge growth, with previous estimates being 10 million or 20 million at the higher end.

In addition their revelation of 7,000 institutions buying bitcoin seems to suggest the digital gold is tipping towards mainstream adoption among corporations.

Once they list, they will have to reveal such numbers quarterly, something that could shed more light on bitcoin’s adoption trends.