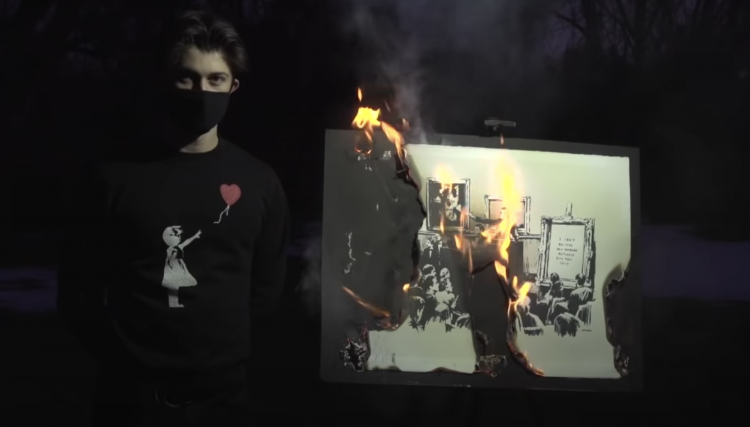 NFTs are getting hotter today following the fire of Long Island that burned a 2006 Banksy original certified by Pest Control.

Someone describing himself as a tech enthusiast said he was working with SuperFarm to create a Non-Fungible Token (NFT) out of the piece of work which then was burned.

They said it was to be auctioned on Opensea where we tried to find it. There is a piece, but we were unable to verify this was minted by the banksy burner.

That we can’t be sure of the veracity of the above suggests both the digital and analogue have the same problem, but only initially.

If they tweet out it is theirs, then the above might have a different value than otherwise, but its authenticity may well always depend on that tweet, which could be hashed, yet we have a weakness.

The weakness in this case is derived due to what has always been a problem in this space, the interaction between the analogue and digital world tends to bring with it all the problems of the analogue world.

In this case veracity, requiring a Pest control certificate, but only once as thereafter its veracity is difficult to doubt despite many changes of ownership.

The piece in question is an art piece that says ‘can’t believe you morons are buying this’ being auctioned in an art auction.

That statement can have many interpretations. One of them is that Banksy got so big, like all humans he fell for arrogance, ridiculing the fact others see value in his work, even while he keeps on creating such pieces.

Another one is that this ‘shouldn’t’ have value, which is silly because it isn’t for anyone to determine what has value and because the work itself is irrelevant as long as it can be authenticated as being Banksy.

In other words, this was specifically designed to be a collectors piece furnished with its 500 limited print.

It does not have value any further than it is limited and it is from the most famous living artist in the world.

The art piece therefore is a commentary on the art investment market and the inherent difficulty of valuing something even if that something calls you a moron.

We don’t know if this kid thinks his dad is a moron for buying this piece, but he probably thinks this isn’t something you put on a wall because it isn’t beautiful. It does not have a decorative value, arguably it has no value at all save that it is by Banksy and it is limited, just a collectors speculative value.

Can thus those two qualities be replicated digitally? Both the paper and the digital version can be copied, yet the copied one has no value, but the original paper one does have value of $100,000.

It has such value because the original of course can’t be replicated in as far as you won’t get a Pest Control certificate, which is what ultimately gives you this show of wealth or store of value or bragging rights.

The burning of this piece not only maintains its scarcity but increases it in as far as it is the only NFT of its kind, with the burning being a ritual of sorts that aims to transfer the value from the original to the digital.

The original is no more and we can be sure of that because we saw it burn. Is now the digital the original? If it is, why should a piece that calls you a moron have any value? Because it is the only one and it’s a Banksy.

Art is the ultimate luxury and thus prestige. One can have a very brutalist square naked house, or decorate it with nice statues and paved ceilings.

The latter is more pleasant to be around, more uplifting to be inside, and thus more desirable. Hence these statues or wallpaintings have value because people want them.

The more beautiful the art piece and the more true the idea encapsulated, the more it tends to be desirable and thus the more valuable.

But what function would it serve in the digital world? Why would pixels on the screen have any value?

This is extremely challenging to think about because it is also extremely new, but we can start with the simple premise that your ethereum address is your digital home.

From that we can establish the basic: digital art does have some value at least for decorating your digital wallet.

Of course anyone can copy this, anyone can see it, but it’s yours. When you go through your metamask checking your activity, an NFT art piece shows up and hopefully makes you better or is uplifting in some way. Just as when you walk around the room the wallpainting does.

The year is 2070 when the world is experiencing a gold rush. Following numerous inventions in the space industry, a new era of expansion has been unfolding for the past ten years.

The present writer, blessed with long age and good health, had financed an expedition to Venus where man’s ingenuity, and ever so quickly to the point of unimaginable, had tamed this beauty for our earthy living.

In his gold office, and they’re all made of gold because there’s so much of it here, the now very much grandpa was to tell back home the Starship journey had gone very well, and he was to be back next week after checking the new colony.

He puts on special sunglasses that are connected to his ethereum wallet to authenticate identity with grandpa to meet his grandkids and family in an immersed virtual reality environment to get as close to the full experience of being with them.

After all the excitement about visiting Venus, his grandkid talks about all these new quantum tokens that he is flippening and how a Cryptokittie grandpa gave him for his birthday means he now can claim so many quantum NFT airdrops.

Wait, you have a cryptokittie? Asks his friend who was around playing. Yeh, grandpa gave it cus he an OG – says the grandkid looking at the Cryptokittie that was displayed on the virtual reality room wall.

That’s so cool, that means you can have… grandpa drifts off now because to him they talking gibberish about quantumly unlocking some game hero that can yadayada.

And to the Present

Going from paper to digital takes a leap of faith because it is all so new. Until now, there has been no digital work of value, and therefore contemplating that can change is challenging.

To our children however, it isn’t very clear whether they will consider the paper art or the digital art as the more ‘real.’

That’s especially if such digital art develops to play a role in digital reality or gaming, where kids can show off their style and preferences as well as their wealth by displaying the NFTs they have in appropriate places.

Paper art however won’t be going anywhere any time soon, but artists now have the opportunity to at least explore a new potential venue for valuable expression.

Whether it’s a fad is the very big question and as a new realm, you’d expect it to have some moronism but hopefully also eventually some actual value creation.

Music is dying. It died with MySpace. Hollywood also in some ways appears like a declining cultural hall. Art was so basterdised by ‘post’ modernism that the most famous of them is some graffiti guy.

Culture in short needs a revival to cast away the dark spells of the past two decades, for poets to roar again with their majestic imagination and for paintings to uplift or elucidate.

There aren’t many avenues for such revival, with NFTs not making much sense to many but it is a new way of potentially building direct access between artists and the public.

As such, it is at the very least a space for experimentation and exploration, with this burned banksy clearly being an attempt at both, but whether successful remains to be seen.