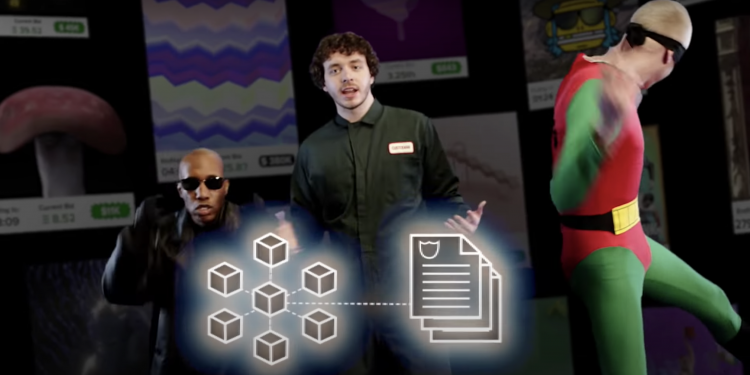 Saturday Night Live has brought NFTs to every American house with a twist that makes the Treasury Secretary Janet Yellen look hip and down with the kids.

The scene is set at a university classroom where after a talk, the professor asks if anyone has a question for the Treasury Secretary. Anyone?

Now what the hell’s an NFT, apparently cryptocurrency, everyones making so much muneh, can you please explain what’s an NFT?

I said what the hell’s an NFT [a cryptokittie mewos]. It’s like real life Monopoly, everyone is doing it, like Gronkowski [American footballer], can you please help me make an NFT.”

“I actually see what you’re saying young man,” says Yellen. “We are aware of NFTs and they’re currently…”

She is interrupted by Chris Redd, another cast member, who the professors asks if he is Morpheus from the Matrix, with Morpheus apparently being the ancient god of dreams. Redd of course is presumably meant to be Dr. Dre to go with Eminem Davidson, and says he can explain NFTs so starts rapping:

“Non-Fungibles, gifs of Ron Funches eating lunches, or pics of Colin Jost’s face, very punchable. Digital images of digimon doin’ scrimmages [?] or a pic of a nun with a nintendo SWITCH.

A dictionary, with a pic of fat Jerry [Seinfeld]. I made it last night and now I got $3,000. And now I can buy me a gif, of Peter Griffin, crossing up all star ballers, who are taller.

Look at these, if you please, Supreme Court Justice Chuck E. Cheese. Bam Margera in a mini coop with master splinter. Amy Klobuchar and Adam Driver having dinner.

Hey [enters Davidson Eminem] here’s a thanos that twerks, for $24 million it can be yours, and the prices go up and down you see, so that explains an NFT.”

“Ok well that was just a list of… complete nonsense, but you’re not totally wrong” says Yellen to Dre shaking his head. “Can anyone here expand on that a bit more eloquently,” she asks with the school cleaner so entering while cleaning.

The cleaner happens to be Jack Harlow, an American singer and the main star of the show, he goes:

“Hey, here’s the thing about NFTs, this is a Non-Fungible Token you see. Non-Fungible means that it’s unique, there can only be one, like you and me.

NFTs are insane, built on the blockchain [that’s right’], a digital ledger of transactions, it records information on what’s happenin.

When it’s minted, you can sell it as art, and this concludes my rapping part.”

“Wow, that’s pretty much what I would have said so thank you,” says Yellen. “I don’t actually know if this is too forward, but I have tickets for UFC 260 if you guys want to come,” Yellen asks while holding up a QR code ticket on her phone which presumably is an NFT. “O hell yeah!” – their answer, exiting to:

Well, that’s quite something and the main thing out of it is presumably that Biden now will kind of have to champion this space since apparently it makes everyone feel pretty good and it’s unleashing a boom in the art world.

Crypto has a way of making very boring – but important – things, be very interesting because it makes them new-ish.

This is encapsulated in this sketch where no one cared to ask Yellen anything because boring, but students are interested in cool NFTs.

This being a cultural piece, we have much name drop and numbers drop, in a list of “complete nonsense,” with little highlighting of actual art and there is some.

However, it makes it all look cool and interesting, and it is really singing praise to this brave new digital world.

That can go some way towards restoring confidence in the United States and its endless ability to innovate and renovate with it leading this space and now potentially with the full backing of the establishment, just as it leads the space race.

They missed one important part on what’s an NFT however, and that is proof of originality, although the NFT ticket at the end arguably makes that point as the main strength of such tokenized tickets is that they can’t be faked.