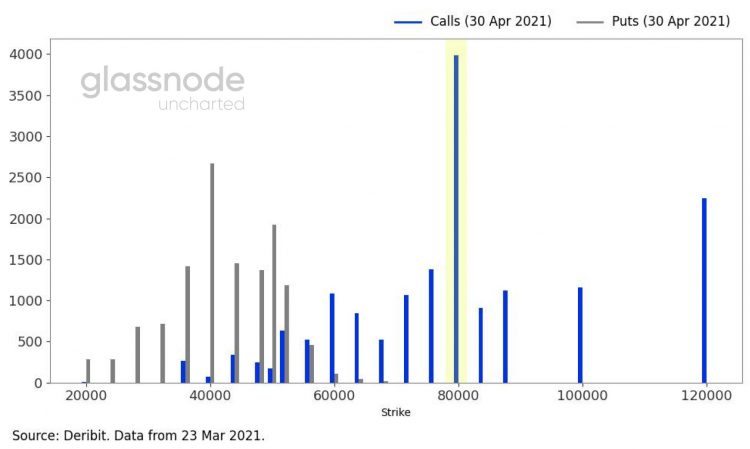 Bitcoin traders appear to be quite optimistic for April with the most crowded options trade being $80,000 according to data from the derivatives exchange Deribit as compiled by the analytics startup Glassnode.

“Bitcoin price expectations for April are high with lots of investors placing their new bets on $80k,” Glassnode’s co-founders said.

Some are even more bullish, betting bitcoin will reach $120,000 this April while bears appear to have low ambitions of just a yet another return to $40,000 as pictured above.

Many of these contracts however might not be speculative bets, but just a hedge of a margins or futures position.

In addition many of the betters might not necessarily expect $80,000. They might just be speculating the price will rise and so their options contract price will rise.

Options as you might know are a right, but not an obligation, to buy something at a certain price.

That right is given for a premium, which is like putting down a deposit for a house. That premium is lost regardless of what the price does, but crucially you can not lose more than the premium you pay if you are the buyer of the call (long) option.

Cheap all this because one option is one bitcoin and on deribit they are settled in bitcoin. However when you buy one option, you don’t quite buy one bitcoin in as far as you’re not the owner of the current price sum, of $57,000.

Instead you’re buying the benefit of the current price difference to whatever price. So at $80,000 you’re ‘buying’ $23,000 but with a lot of complications.

There’s delta and IV and a lot of woodo called the Greeks. In simple terms it seems to be that the quicker the price reaches $80,000, the more of that $23,000 you get, and vice versa.

However, if we’re on the 29th of April and the price is say $80,000, then you still would have made a bit of money, but not thousands and you may even be at a loss because this right is about to expire and thus become useless unless it is in profit, above $80,000, in which case the premium would be the difference of the then plus price and $80,000. If under then you lost the premium.

The option however probably contains speculative elements within it and has supply and demand pressures of its own.

In practice however you have bots and wiz kids that do nothing all day but crunch numbers to shave off any arbitrage possible, so the ‘rational market’ theory should apply here.

That’s because in some ways this is ‘free’ money for the option writer who just buys a bitcoin when you buy one call option, and so if the price reaches $80,000, he just sells the coin. If price doesn’t, he keeps the premium, making it a risk free-ish bet.

Or he longs on futures at a 1x margin, with ‘he’ here most probably being an algoed bot that just follows orders.

On the other side, if you think bitcoin’s price is gone rise and you want to 100x yolo while worried it might fall, you can buy that $40k put option just in case so that you don’t get left without a shirt, losing just the premium while pocketing the margin gains.

Or, instead of 100x yoloing you can buy the call option contracts and risk losing the premium, but also stand to gain a lot more with potentially less risk as those scary wicks won’t margin liquidate you.

On the other hand however there is no such thing as perpetual options so you can’t sit on your lucky 100x forever from $80 eth.

Thus this crowded $80k option bet both tells us nothing and a lot of things. Nothing because it could just be maths geeks fine tuning arb monkeys.

A lot of things because it is probable, and that’s just our speculative guess, that a lot of these kids actually think bitcoin will hit $80,000 or at least is headed that way.

That is potentially because April tends to be a very good month for bitcoin. So wizzies may well be bullish.