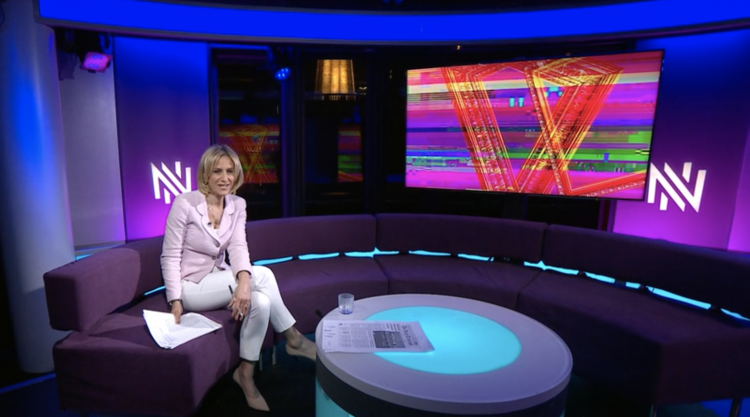 UK’s most prominent news program, Newsnight, has become perhaps the first to mention ethereum at this level, albeit just in passing.

NFTs are then explained through what is now becoming the standard ‘token stamp on a work of usually digital art to prove originality’ with the program then somewhat prominently featuring Jonathan Yeo, a British artist that is to sell an NFT.

The lack of any criticism is notable in this piece as in almost all others, with someone saying art is worth whatever people are willing to pay for it, while an art critic said he hasn’t seen a Francis Bacon in the world of NFTs yet.

The visuals are appealing, leaving the viewer intrigued, inspired, and with a feeling there is something going on here.

This could be a new art genre someone said, with Newsnight not quite affording a discussion panel to what is a minor segment of the show, not least perhaps because there isn’t much to discuss than ‘is there something here’ with most presumably saying we don’t quite yet know, but we’d say probably if there is going to be modern art and thus our era’s Francis Bacon.

To aid in that, ethereum’s dev studio ConsenSys has launched what they are calling Palm with Damien Hirst to sell 10,000 NFTs on it that have a physical counterpart.

There is little detail on how Palm is meant to work exactly, but Joseph Lubin, the Founder of ConsenSys, said:

“While Ethereum 2.0 transitions to Proof of Stake, artists and creatives that want to issue NFTs can now use a new sidechain built with Hyperledger Besu.

Our Protocols teams have been developing various scaling solutions for years for enterprises and central banks, which use a Proof of Authority consensus mechanism.

With Palm, ConsenSys will initially work with the joint venture as node operators, while still allowing for the trustless transfer of tokens to the Ethereum mainnet with a Hash Time-Lock Contract (HTLC) bridge, and progressively decentralize node operators initially serviced by Infura and Palm NFT Studios.”

This is described as a sidechain linked to ethereum with most of the transactions happening on the sidechains while allowing for the possibility to transfer them to the ethereum blockchain.

The design so allows them to claim Palm is very environmentally friendly as it reduced 99% of ethereum’s energy needs per Palm transaction.

There is a native token too called palm, with little detail on how that is to be distributed, but all of this is debuting with a very big name and thus the narrative of the art world becoming a bit sexy due to crypto NFTs so continues.