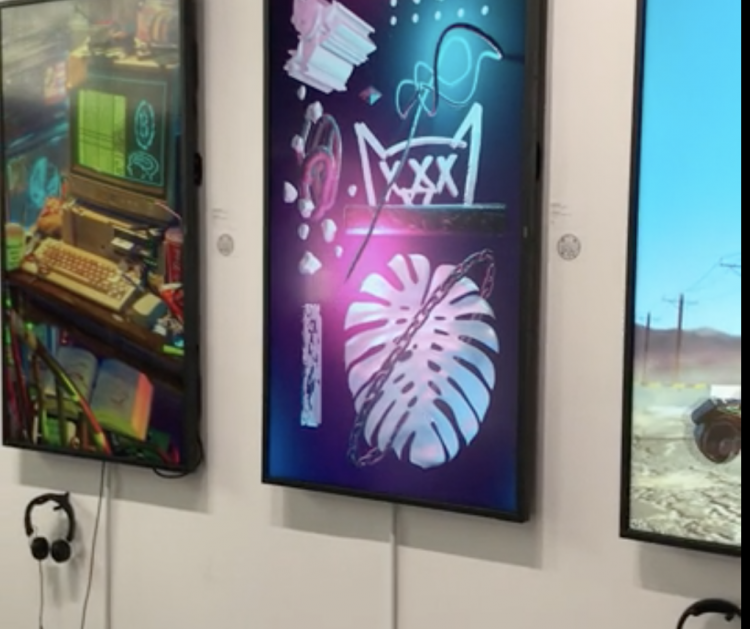 A real life gallery has began displaying NFTs in Georgia, Atlanta. The works are displayed in the wall like traditional art paintings, but with visuals and also headphones to potentially listen to any song.

The ABV Gallery at 659 Auburn Ave in Atlanta, has become the first of its kind with it showcasing a number of NFTs as pictured above.

Making it an interesting experiment, especially for kids and teenagers who may find the works of digital art far more interesting than the endless portraits of dead women and men.

Yet some wonder why bother going there when you can look at them from your home screen. Part of the answer presumably being that you won’t know what you’ll be presented with and it is presumably a very novel experience.

Unlike contemporary art galleries, like Tate modern, where you’re shown a banana and ordered to appreciate it, here the artist is in many ways below you and thus has to seduce you.

He or she has to battle your dismissal with amusement, entertainment, or indeed beauty, and overall collectively they have to make it too cool to court your innate curiosity.

They have to answer the question of why be there instead of take it for granted you will attend, and more importantly they have to ensure you enjoy the display instead of throwing a banana in your face because old grandma Tate has lost the will to create.

So these artists outside of the guilds of century old strata have on their side a most powerful weapon. Just like the then ridiculed Pythagoreans and eventually the brutally oppressed brotherhood, they have on their side that mystery of just what new things they are creating.

In the process, they are shaking the art world whether it knows it or not, because it is infusing a certain energy that derives from leveling participation to the mere time and talent, as well as opening it to the entire globe where anyone anywhere can engage in modern art driven by their passion for it and now monetary incentives.

Indeed virtual art galleries are popping up in a space that has barely began the trial and experimentation of new capabilities now on our hand.

Instead this movement is at the pre-nascent point of answering the question whether it even exists. Whether there’s any truth to any of it, whether they are really doing anything, whether they’re scammers or today’s Pythagoreans.

The answer to that must be very simple. They have no choice but to engage fully this new innovation, as it is the only thing to promise in any way – however whimsical – to tackle the question of digital scarcity.

Until something else comes to address that hard problem of digital scarcity, the solution on offer, with all its imperfections, must be engaged if there is to be modern art at all.

Not least because the potential innovations that can follow are considerable, many unknown and some easily envisionable like the option to encrypt the art work and allow access say only to certain token holders.

That might be a dud and a lot of experimentation will be, but it must be the first time in centuries that a new art medium is invented since the canvas, and that fact alone you must think would release considerable energy and creativity.

If we are wrong, then we had fun, but if we’re not, then it is perhaps no exaggeration to say we stand at the dawn of the upgrade of man. A poem, our very own, it’s called Sublime Delusional Subversion in the Triumph of Hope:

Were it books, that stand here shattered,
in this colloseus of lord?
Is our moon, here broken crater,
in this universe of hope?

Is our statueees down the ground,
heads o fallen of thy man.
In this halls o spaces dawn,
here our triangles, burned.

And the masses, hear no voice,
gone their heads, and our toys,
chanting toooo the bear man,
enslavement, for the pen.

Grab your coats and, run like wolfs,
madness here has, grabbed our truth,
save what book you, can Ales,
Alexandria, buried space.

Pray the myth so, stands so tall,
tell them truth or, lies you know,
tell them how they, killed the pen,
pray one daaaayyyyyyyyy, there will be men.

Revolution, here we come,
by, our code we rule the cunt.
Tapping spaces, langguage gods,
ours the globe, and ours the world.

Down the guilds of middle ages,
aristocrats wave the waves,
our own books are our own truff,
free the pen, youuu mutts.

Reeevooluttion hear the day,
Alexandria everywhere,
books of halls are books of ours,
internet brings castes down.

Grab your code and lets revolt,
take it to thy penny lord,
free for man and free for aall,
why, our, scientists, fahaaalll!!!

Here we stand,
in the halls,
looking milkies,
we adore,
push and touch,
o thy lord,
are they hores.

Sweat them nicely,
call them free,
give them ammo,
for victory.
Commieee waiiiii, fly the flag,
libertaaaaaass, for the han gry wahaaans.

To think, the truth is falling, here, in my eyees.
The world, so much adoring, and yet it’s, falling dahaown.
Objectivas, to the sky, flahaiii o don’t flyyy.
My code!!! wauwauwau,
I shall fighiiiiiiigighhtththtt.

There was a time,
in barbari gone,
they paid no art,
o thought of noohone,
and there he rose,
Nakamo god,
a german lad,
of Alexahand.

And there he typed,
by code alohone,
objectivas, in heart and thohought,
and so he brought,
the truth of lord,
restored the pen,
killed by the ohoooldd.