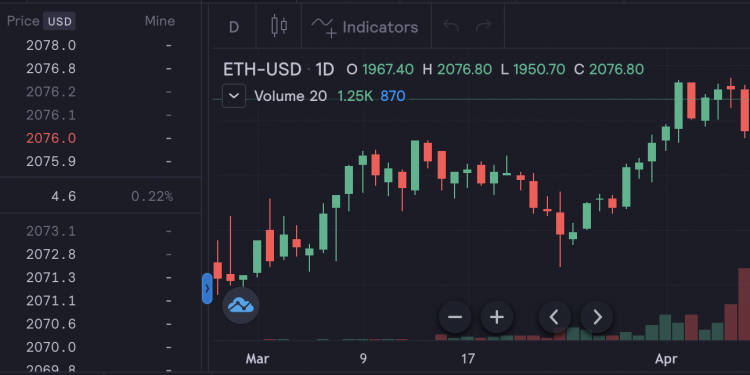 One of ethereum’s biggest decentralized exchange, dYdX, with $270 million in crypto assets under management, has announced the launch of perpetual futures on second layer technology.

The current base layer perpetual futures will be deprecated on April 20th, dYdX said, with all thus needing to move to the second layer.

This is the first project of note to go live with this new scaling technology after launching a testnet as far back as summer 2019, with it now coming out of a private beta so we gave it a testrun.

We have previously used dYdX to deposit a small amount just in case they airdrop a token, so it’s not clear whether with a plain address we need to connect first, but to enter the second layer we need to generate a stark key.

Unlike an actual private key, this looks more like a signature that proves to the second layer you own the private key. Thus they say it can be recovered anytime, so no need for foo bar seed here.

For some reason they want our email. You can then optionally give them your email and choose a nick with this bit seemingly more to do with whatever their VCs and business department told them, rather than being a requirement tech wise.

We thus move to the key part of the grand entrance, and here we finally get to talk to the blockchain.

Now this is very interesting because it says register and not deposit. We didn’t follow through because we’re running low on our test account, but the suggestion here seems to be that your eth doesn’t quite move onchain.

That’s probably because for dYdX you have to deposit the trading balance in any event, so this is like the approve or register pre-proper-transaction that is common in base layer dapps, but in this case it is for the second layer.

The difference is that once you’re in, you don’t have to deal with the blockchain anymore, unlike previously where every trade was an on-chain transaction.

That’s because now accounts are kept in-contract through zk-starks with their description being:

“StarkWare zkSTARKS technology is a form of ZK-Rollup technology that significantly increases dYdX’s trade settlement capacity, while still basing its security on the underlying Ethereum blockchain.

Trades are settled on a Layer 2 system, which publishes Zero-Knowledge Proofs periodically to an Ethereum smart contract in order to prove that state transitions within StarkWare’s Layer 2 are valid.”

What they publish on-chain is just enough data to be able to reconstruct all that is needed to prove validity, with most data kept off-chain.

Starkware now has a whole roadmap to get to effectively a decentralized second network running on top of ethereum.

0x came up with much of this, so dYdX is pioneering it, with this still being very much part of the testing ground, but now live testing to meet real demand.

So marking the very beginning of ethereum’s increase in scalability through second layers that is expected to heat up during summer.