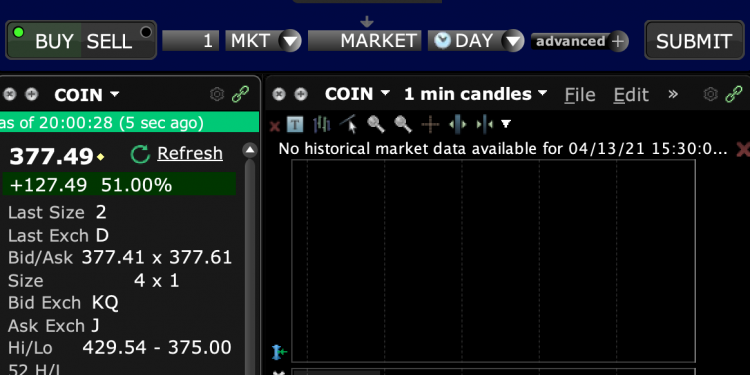 Coinbase has began trading at $333, significantly lower than futures sugggestions of $620.

About 4 and a half hours after the opening bell, Coinbase finally started trading at about 2PM New York time.

It initially fell from $337, but moved up to $377 at the time of writing as pictured above.

At what price it will settle remains to be seen with bitcoin falling to about $62,000 at the time of writing.

It is generally unusual for any crypto stock to affect bitcoin’s spot price, while the reverse is somewhat common.

In this case it might do so just because that is the current focus as the listing has been somewhat perhaps even overhyped.

By crypto standards however this is in effect a 100% pre-mined coin controlled by probably around 10 VCs, debuting now at a valuation of about $100 billion.

By comparison Binance, one of the biggest crypto exchange, ICO-ed at a market cap of just half a million, giving the public the full opportunity to participate in capital formation and to reap the fruits of it.

We may be witnessing therefore the shortfallings of the traditional stock market, which can only illustrate the superiority of the crypto way not least because there was effectively nothing for the public in this offering.

There were no new shares, and thus no dilution of the previous holders, and thus there is no capital formation in the real sense of the word.

This is instead just rich billionaires selling to the public after a nearly decade long embargo enforced by the law of the United States.

So this disappointment is maybe not unexpected because in this crypto space we wouldn’t do many things we are, if the traditional stock market was superior.

It isn’t, and today we’re seeing the clearest proof of it. Coinbase, as the biggest crypto exchange, should have at least hybrid ICO-ed, debut the new way of capital formation.

Instead they just went with the old rigged way where some billionaires want to sell 100% of the equivalent of 2009 bitcoin in this 2021 after the public was prohibited by law to buy it during that entire decade.

In other words, rigged, and instead of capital formation, this model is little more than what one would design for monopoly formation.

Making it historic in its own way as the full shortcomings of the stock market, where some men in some dark room deliberated for hours in full secrecy and where in this case there is no bar on insider trading with full control on few hands that can pump and dump at will, is for the first time on full display and in full contrast to the crypto way of debuting to the public where the offering generally starts at zero or as good as zero ownership prior to the public having the offer of owning some of it.