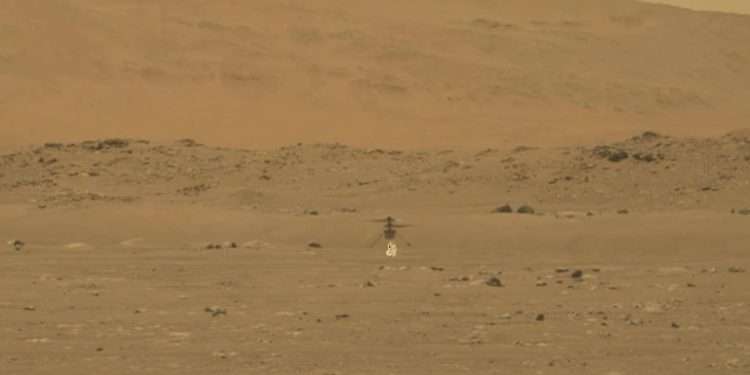 Dogecoin has hitched a ride to the red planet with the Perseverance rover and for the first time has today stepped on Mars.

Dogecoin was laid down as meme pictured above while Ingenuity flew 10 meters in the air and then landed back on Mars.

The iconic pair was accompanied by a small swatch of fabric from the 1903 Wright Flyer held by Ingenuity.

To celebrate, dogecoin rose again to near half a penny as shibes on earth cheered on man’s ingenuity.

Dogecoin has risen significantly in the past few weeks partly on the back of the WSB crowd and partly because Musk loves memeing it.

The coin in addition is probably just as good, if not better, than many other coins, especially things like Cardano or TRX which are worse copy cats of eth.

Dogecoin instead is not even a copycat. It has a fixed new supply, somewhat in line with orthodox economic theory that argues a small amount of inflation is good. In contrast, bitcoin has a fixed total supply and an ever reducing new supply until zero.

Dogecoin also has all the memes and the fun community which is unique in the crypto space and contrasts to the more serious eth ‘killers.’

It also perplexes because why is a joke valued so much, $50 billion, and the answer is maybe because technically where the code is concerned, it is sound and decentralized etc, while where the brand is concerned, it is probably better known than any other coin except bitcoin and maybe eth.

So, can it keep its gains? Well, that’s for the market to say, but in a long enough time-frame, it is a maybe probably.

In the short term, well, well, that is definitely for the market to say. However even if some are annoyed, we’d prefer it to keep its gains because why not. It’s doge. The only coin bitcoiners had so much of and now probably have zero cus it’s doge.

So class of 2013 now gets to do that thing all over again. Maaan I had so many doge! Where that IRC guy that used to run that dogebot, must ave so much now of what then was pennies.

Price is gone do whatever it wants, but there is something even profound in seeing the above screenshot and the rise of doge.

At its peak in 2013, it opened to the public at a market cap of $2 million after publicly launching at a value of basically zero.

Contrast that with Coinbase, which also launched at a value of basically zero in 2012, but opened to the public at a market cap of $100 billion.

There will be no stories, save for a handful of already billionaire VCs, of selling their Coinbase shares at a penny or a dollar.

There are however probably countless of then students and others who now laugh and go wow man I had so many doge!

Silly or no, this is a revolution in effect on fundamentally how value is allocated in society, and in many ways this is a radical challenge to the grip of billionaires on the rules of how such capital is allocated.

It’s not that Coinbase did not want to sell their shares to them students or anyone else in 2012, it’s that billionaires have rigged the system to by law allow only them to do so until Coinbase is so big that there are no wow stories.

We fought the system thus, and at least so far, we won this time. Our trick was a cuty doge because even tyrants have their weaknesses was the utilization of the invention of code to open up finance itself while upgrading it both in form and hopefully also in substance.

There may be some who do not like it, but generally they’re old and so we’ll wait their time. For the vast majority, this is the real taking back control. And although of course these things will go up and down and crash or smash beyond Mars, it is at least we the public that gets to play from ground zero, not be forced to somehow jump to ground $100 billion.

And the best part is that in some ways, it has only began for this space is still not even 2% of the entire stock market, let alone the entire startup space.

So who knows what a century from now they’ll heil as a comparative achievement, but hopefully by then some of them will do so from Mars.