Bitcoiners Head to the Conference of Europe 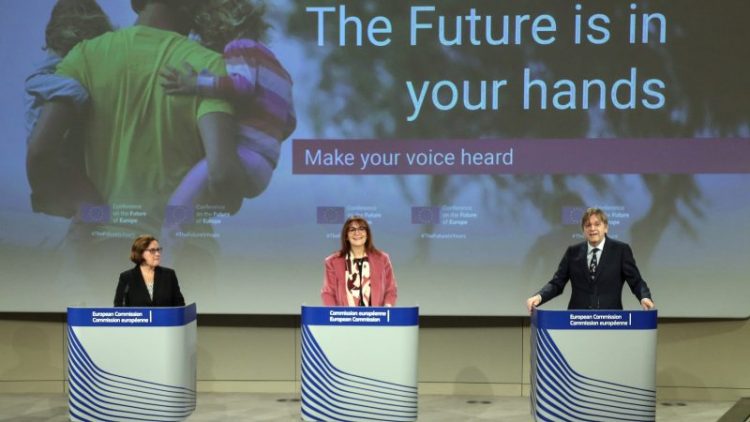 For the first time in a generation, the people of Europe are asked to raise their voice at the Conference for the Future of Europe which just launched its digital platform on Monday.

The gathering of Europeans, styled in the form of a Citizens Assembly, kicks off on May the 9th, Europe’s day, presumably to the tune of Beethoven Ode to Joy.

It’s the first time European citizens are directly asked for input on just what they want the European Union to be, with it organized in different categories: economy, foreign affairs, democracy in Europe, and quite a lot more.

This Citizens Assembly style event may even produce a constitution out of it, so power brokers across the continent will pay close attention as a new Europe may well derive legitimacy from this conference.

It is arguably what the French yellow vest protests were about, and it is here, and bitcoiners are too.

Matej Bernatović wants to ‘protect’ average investors by limiting crypto leverage to no more than 5x to 10x.

A bitcoin standard might make more sense in this digital age, but this has just launched, so it will probably take some time for more sophisticated ideas.

Where cryptos are concerned, the European Union has generally taken a reasonable and a friendly approach.

We’d push for this e-stocks idea, and more than that we’d want to see some real reforms of investment prohibitions.

The European Union has followed Switzerland in taking a three legged approach. There are traditional securities, utility tokens, and then non-securities. For utility tokens they require a prescribed prospectus.

For securities, there are no restrictions if funds below €10 million are raised. Above that, only the upper class is allowed to invest. Something that should be changed to be more laddered so that there are little requirements for fundraising up to €100 million and then stricter requirements until everything applies above €1 billion.

For there to be a more liberal and contractual approach to startup fundraising, which naturally would include crypto based fundraising, there has to be a well funded specific law enforcement agency specializing in investigating and prosecuting start-up fraud.

This in effect would turn on its head the current approach of guilty until proven innocent, to allow law abiding citizens to engage in enterprising while having a real threat for fraudsters and criminals by beefing up a specific law enforcement agency and if desirable even by increasing criminal sentences for these acts to punishing levels.

This may allow for a lot more dynamism in the economy, because otherwise innovation is controlled by a few generally old VCs who tend to prefer monopolies because naturally they won’t fund a competitor.

From our general reporting the European financial market appears to be a bit inefficient compared to the American one.

It’s for specialists to undertake detailed analysis as to why, but one reason might be the inability to efficiently tap into continental level markets.

The European Union of course has passporting, so it does have a continental level market, but it is still national ‘SECs’ like Bafin in Germany or AMF in France.

The reason thus is probably because they look at it from a national perspective, which allows for experimentation, but perhaps there should be some base rules at a continental level that apply across the EU, with the nation level SECs then maybe having some authority on extra rules or whatever the state level SECs do in USA, of which there are some.

If there is an EU SEC, then it has to learn from the failures of the US SEC, including whether the latter is both too big in having jurisdiction over almost all of the economy, and too small in that it is barely funded.

From an EU SEC then derive continental level stock markets. This will be a lot easier with crypto because it is new, so it can either start there and expand to more traditional finance, or take a more neutral approach where form is concern and just leave it to market participants to take up on new streamlining opportunities or not.

Obviously with this EU SEC, if it is a good idea at all which might be discussed in this Conference, there are a lot of autonomy, sovereignty and constitutional questions, including the separation of responsibilities between the EU level jurisdiction and the national level. So bringing us to the most important question for the citizens of Europe.

The European Union is in many ways a project which has barely began, but has now reached the stage where citizens have to answer whether it should begin properly.

At the current state, the sofagate has shown a level of confusion regarding just who exactly is responsible for what in EU and who is the equivalent of head of state – the real one not the Queen like one.

That’s because no one at the EU level is directly elected to that position. They are all appointed by the elected heads of state of member states.

In France for example no one would mistake the prime minister for being the guy in charge, while in Italy no one would care for the president.

In Europe, we all thought Ursula von der Leyen is the equivalent of being in charge, and she probably thought so herself too. Yet it appears she isn’t quite so, and therefore no one knows who to blame for anything or who to go to for anything.

That’s arguably because EU in its current form is not meant to do anything that matters, that’s the national governments. More and more however people look to EU to do continental level things.

As an example, there’s now an EU border force, which was already there but now it is an actual one. The EU apparently also has troops, but they’re not ‘actual’ ones yet.

If Europeans were asked if, for example, Russia should be dealt with at a national level or at a European level, presumably the vast majority would say at a European level. Yet Europe currently does not quite have the authority or even arguably the full legitimacy to do so.

Presuming the citizens want some movement, should there be a head of state, like Macron or Merkel rather than whoever is the French prime minister or the German president.

The Swiss system would have to come with direct democracy, which means referendums on pretty much everything. Is that appropriate at a continental level and for potentially a superpower?

If they are to be directly elected, would it be a presidential system as in France or a parliamentary one as in UK or Germany.

Plenty would probably say it should be a real parliament, but not of the sorts to which parliament is supreme applies. In which case, what sort?

Well one potential design is the current parliament is the house of representatives, and the EU council made of the heads of state is the second house of parliament, the senate. In addition plenty might like this Conference model or Citizens Assembly to be a third house of parliament at least on a consultative basis.

The two houses then should have the right to impeach the EU head of state or have a vote of no confidence, in addition to having jurisdiction to make law that is supreme on continental level matters.

What are those continental level matters? Now that’s book worthy, but an easy answer could be the same jurisdiction as now but the right to make supreme law on it.

One can’t recall the last time the people were asked just how they want to be governed, but arguably the answer is ever evolving, which is perhaps why this Citizens Assembly should continue to play a role.

For now, they may well come back with a formalization of the EU level functions that, most crucially, derive authority directly from the people through elections.

They may well maintain the same jurisdiction, perhaps expanded in some areas, but the outcome may well be they have full authority over such jurisdiction in a clear and precise way that is accountable directly to the electorate.

The details on that however may be a lot more complicated, but presumably everyone agrees there needs to be an elected EU head of commission or head of state, the equivalent of the person in charge in the EU under the accountability of the electorate. The commander in chief if you like of those 4,000 EU soldiers. The person with the power in EU that appoints heads of agencies, including maybe even the head of Europol, the equivalent of foreign minister etc.

If there is to be such person, then they have to be continuously accountable to parliament or some equivalent body, so parliament has to become a real parliament where its own jurisdiction is concerned.

The details then would be subject to electoral manifestos where the EU has jurisdiction, so they would change.

That would effectively lay the foundations for a functioning EU, which currently it clearly isn’t, and then the question would become just how much power this EU would have which would probably be subject to evolutionary forces.

And so the day is here, with Europe so taking this most democratic step which can well be the seed for renewal in the continent.