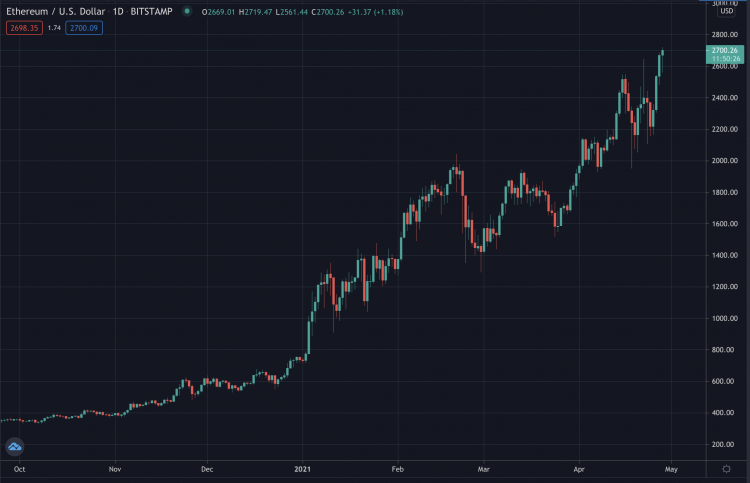 Ethereum has risen above $2,700 for the first time, with it currently trading at $2725 as the currency reaches a new all time high.

Its trading volumes have ballooned to $33 billion, nearing bitcoin’s $47 billion as eth takes the crypto show.

Its ratio is now nearing 0.05 bitcoin per eth for the first time since August 2018, almost three years ago.

The immediate catalyst for this bullishness appears to be a capacity increase of about 20% following an upgrade earlier this month that improved gas calculations.

It looks like that took the market by surprise because everyone had forgotten about this upgrade and what it was meant to do.

The improvement in capacity, therefore, and the lower transaction fees that came with it, had not been priced in.

In addition, its timing could not be better narration wise. Just as Cardano was loosing luster and other eth killers, including the copy pasta Binance Chain, eth partially addressed their chief criticism regarding fees by so increasing capacity. Bringing back all that value that may have gone to these chains.

Just as important may well be the upcoming EIP1559 which is now penciled in for July. That’s just a few months away for this drastic change to ethereum’s monetary economics which may lead to $40 million worth of eth being burned every day depending on network fee levels.

Another way of saying that is this will be the equivalent of someone buying $40 million worth of eth on top of current demand and everyday as miners won’t have this supply to sell.

Thus eth has been gaining on bitcoin, which is struggling at $55,000 currently, with it to be seen whether it will maintain this bullishness.