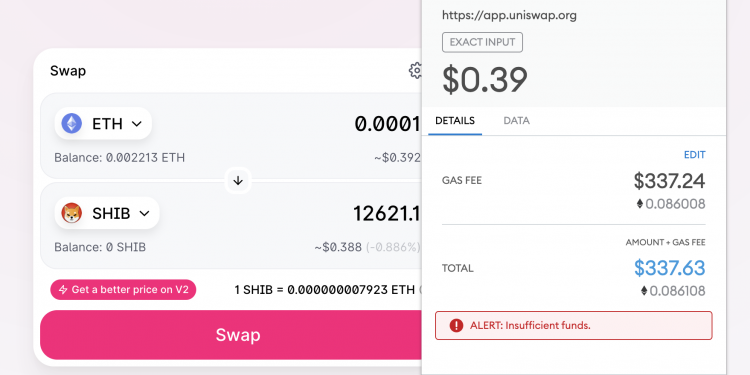 Average fees have now spiked to $51, an all time high and by far, significantly above the February 2021 peak of about $20.

The reason for this congestion seems to be some ‘meme’ tokens that are probably just organized opportunistic pumps and dumps.

Shiba seems to be one, describing itself as a dogecoin killer, but the only thing they are killing right now is the ethereum network and probably the pocket of many.

This is generally a sign of a local top. People chasing in just because they think other people will chase in, with previous luminaries being the useless token, and many others we don’t even recall because usually they barely last days.

One prominent example may be the Few Understand attempted meme of the Few token that was allegedly an organized pump and dump by ethereum insiders.

They generally tend to work for a bit with Shiba Inu (SHIB) up 36,585.89%, but few last the day and even less the week as this is just the opportunistic fleecing hopefully short window that tends to follow significant genuine rises in crypto prices.

In short, be very careful when playing with fire. There may be some turbulences on the way, but for something like eth hopefully it is just a correction with the air cleared eventually. While something like Shiba is probably something you won’t quite remember in a few weeks.

Where the congestion is concerned, some dapps have already moved to second layers like dYdX. Uniswap may do too sometime this summer. That should provide significant capacity and so lower the fees.

For now, just wait out this ‘clearing’ of too dumb to party, and wait for the real party to come back as hopefully it will.

Obviously as anything with price, we may be completely wrong, but where the network is concerned this is likely temporary with the congestion to ease eventually followed by capacity increases through the roll out of second layers.