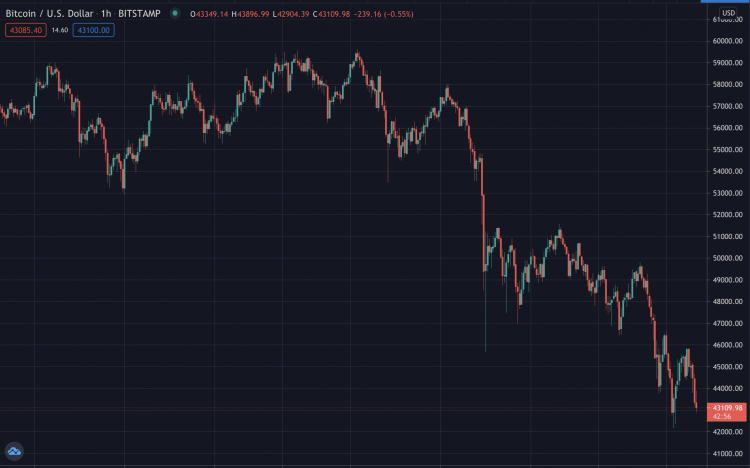 Tesla’s CEO Elon Musk and bitcoin maxis have had a very public fallout of sorts with Peter McCormack, a bitcoin maxi, calling Musk a troll as well as “a bit of a dick” while calling some Musk statements “the crap you are disseminating.”

Musk’s reply was maybe a bit predictable: “Obnoxious threads like this make me want to go all in on Doge,” he said.

“Bitcoin is actually highly centralized, with supermajority controlled by handful of big mining (aka hashing) companies. A single coal mine in Xinjiang flooded, almost killing miners, and Bitcoin hash rate dropped 35%. Sound “decentralized” to you?”

Then a tweet about Tesla potentially selling the coins in rage quit sparked rumors they had sold them. Musk said however: “to clarify speculation, Tesla has not sold any Bitcoin.”

Musk is being blamed for all this, but there is something to be said about a correction being due as eth and many other coins mooned.

However its a first that bitcoiners find themselves in this sort of situation where someone holding a lot of bitcoins, a champion of it until a few days ago, and someone with a very big microphone, says some inconvenient things.

The rawest analysis would have it that he simply got angry by this McCormack guy calling him all sorts of things. Musk is a human too at the end of the day, and in our day and age controversy sells, so he hasn’t shied away from baiting, creating, or responding to controversy.

A more sophisticated analysis would have it that he maybe has a strategy. That’s particularly after the revelation that he has been working with dogecoin devs since 2019. Showing him to be not just a passive investor with opinions, but either a player or an aspiring player.

His considerable influence can translate to control, and maybe that is what he wants, control of a coin. In this case dogecoin.

The question would be to what end, and there we have no basis for speculating so one has to assume he is a genuine cryptonian that wants to advance this space.

Yet his considerable influence thrown in at a decentralized coin risks turning it into a Musk coin. Something dogecoiners may or may not care about because the price has considerably appreciated but it has also nearly halved from its recent all time high.

“Only if Doge can’t do it. Big pain in the neck to create another one.”

That was his reply to why he doesn’t create his own coin. So in effect he is all but admitting what we said above. He wants to take over and control a crypto, in this case dogecoin.

Establishing that, what is difficult here is to ascertain motive, and thus what the response should be.

There are two scenarios. As the richest man on earth, he obviously didn’t get there without significant help from the banks in the form of loans.

If anyone has benefited from the way things are it of course has to be the richest man because he obviously won and thus has a clear stake in fiat printing. Unconsciously or consciously therefore, in that position, disrupting the would be disrupters would make sense.

Yet without some concrete evidence it wouldn’t be easy to jump to such conclusion, but it would be easy to paint a picture of Musk trying to destroy the institutional investors and corporate bitcoin treasuries narrative because whether he knows it or not, that is what he has attempted.

More recently a clearer picture of dogecoin being used as an attack on bitcoin is seemingly emerging with Musk’s narration being that bitcoin is environmentally bad but: “Ideally, Doge speeds up block time 10X, increases block size 10X & drops fee 100X. Then it wins hands down.”

So it’s doge, not bitcoin, time. And all this is happening at near the mainstream level, although Musk is more niche really but with 50 million twitter followers.

Making it a very new level, and thus very challenging because the second scenario may well be that like everyone else Musk too has opinions and he happens to have quite a big microphone in expressing them.

The ‘billionaires benefit from money printing through ‘infinite’ bank loans so obviously they’d want to attack bitcoin’ angle in this case would find some difficulty from the fact Musk funded a startup with angel investment and sold it for $20 million (his stake) and then went on to fund another startup, so banks didn’t quite create him from thin air by just ‘loaning’ him say one billion.

That may have been then, however, but now he probably relies on bank loans significantly, aka money printing. Nonetheless, he may well be a genuine cryptonian and like a lot of us when initially introduced to this space, we naturally think a lot of things can be done better if certain things are changed a certain way.

The latter would be a threat of sorts too but only in as far as a child going to a Space X rocket and changing things inside thinking he knows better than the rocket scientists.

Which leads to the conclusion that motive is irrelevant and it is probably better to assume good intentions, but acts matter and obviously painting dogecoin as some bitcoin killer is a bit stupid.

In addition arguing that bitcoin is bad for the environment but some new coin he shapes or creates is better, misses a bit the whole point where even billionaires can’t quite control bitcoin.

They can influence of course, but there is a reason bitcoin doesn’t just 10x its blocksize. Some disagree with those reasons and forked to Bitcoin Cash. However bitcoin remains far more valuable than BCH.

Dogecoin maybe is better than bitcoin cash community wise, but it would be a bit of a dirty crypto if it becomes just a billionaire’s toy.

Something that can’t quite happen to bitcoin because it is billionaire neutral. So believe it or not, this perceived or otherwise attack on BTC by Musk is a good thing.

It is a good thing because bitcoin may show that unlike in other internet areas where they create walled gardens based on data – Whatsapp being the latest example which EU should force to open up their data to foster competition – cryptos like bitcoin are neutral platforms that don’t favor one billionaire over another or indeed billionaires over non-billionaires.

Someone like Musk or Zuckerberg or whoever can create their own coins or maybe even co-opt something like dogecoin, but that would be a very different space and one where fools maybe will play in for a bit, but not for long.

Because the whole point of bitcoin is that no one can control it and change it as per the latest flavor of their opinion. And Musk is maybe showing that very fact once more.

Some months down the line therefore we may well say that even billionaires can’t control bitcoin, and therefore you should feel somewhat safe in putting some of your savings in it as the crypto won’t just change or even vanish by too much Musk paint.

“Economic elites know all this.  They will not be idle.  This is what I mean by a powerful danger.  If the kleptocracy controls technology and the means of distribution, then they simply accumulate more wealth at the expense of their citizens, draining wealth in cryptocurrencies rather than dollars or euros.”

That warning by Commodities Futures and Trading Commissioner Rostin Behnam in 2018 speaks of what may well be the biggest danger to cryptos. Namely that the allure of making money seduces significantly to the point the platforms are no longer neutral, but controlled.

That said, experimentation and competition should be welcomed, not least because there’s nothing we can do about it as even the present writer can very easily put up a new chain out there.

However it is questionable whether something like dogecoin would have survived this long if it was perceived to be controlled. To the contrary, one of its allure was that it was perceived to have no devs. So it couldn’t change anymore and thus was stable, making 1 doge = 1 doge forever.

That arguably is the ideal end state for cryptos and perhaps the first one that reaches it becomes the crypto with some 80% market share.

The stage where it’s not only the case that no one can control it, but no one even has influence.

It’s not clear whether that stage can ever be reached, but something like bitcoin is kind of set in stone and ethereum is nearing its final form where monetary policy and largely technical form is concerned.

Beyond bitcoin, and maybe eth, other coins are for experimentation but it’s not clear whether the billionaire experimenting stage, if a decentralized project lets them, would be much good for them.