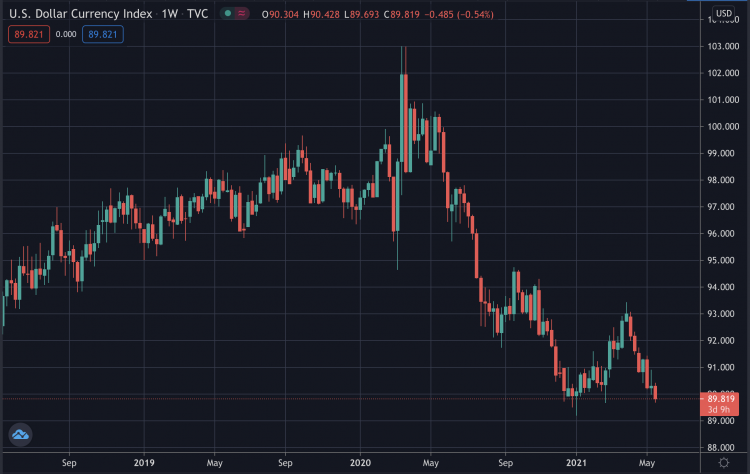 The dollar has fallen to its lowest point since April 2018 with its strength index, DXY, falling below 90 from a March 2020 high of 102 as pictured above.

One dollar is now worth 6.4 CNY, significantly less than the 7.2 CNY in June 2020 as USD loses value against major currencies.

That may be in great part due to the deficit rising to $1.9 trillion with the Congressional Office for Budget Responsibility (CBO) stating:

“The federal budget deficit was $1.9 trillion in the first seven months of fiscal year 2021, the Congressional Budget Office estimates—$449 billion more than the deficit recorded during the same period last year.”

That borrowing of some two trillion is more than half of all the yearly tax intake at circa $3.5 trillion, with the United States clearly spending a lot more than it earns.

Total debt is now at $28 trillion, or close to 10x their income, with it effectively amounting to two mortgages at a 4x the income assessment.

Interest rates are at near zero however, which translates to much money printing and thus a devaluation of the dollar which has also fallen against the euro from 93 cents to now one dollar buying 81 euro cents.

That makes imports more expensive with the United States importing significantly more than it exports, and thus holidays will be quite a bit more expensive for Americans this year.

This devaluation should also lead to an appreciation of limited assets, like housing, stocks, or cryptos with bitcoin kind of ranging currently at $43,000.