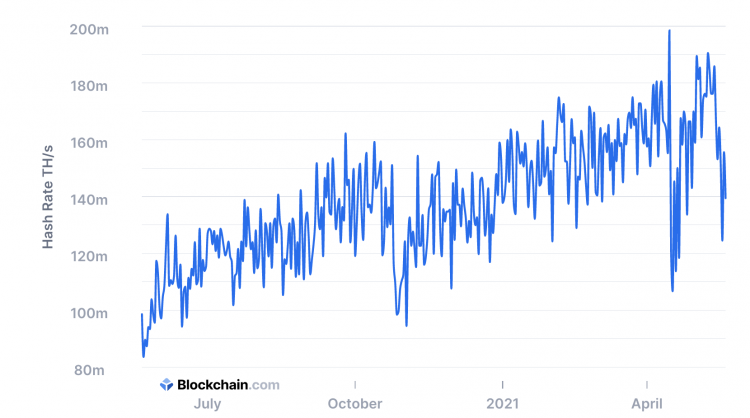 Bitcoin’s hashrate has fallen by some 33% from 185 exahashes to 124 exahashes per second just a month after it fell 40% to then recover.

The plunge last month was caused by an incident in Xinjiang that closed mining farms there. This time some suggest there were power outages in Sichuan.

Sichuan is China’s biggest mining region with it currently going through a dry season. Most of its electricity comes from hydro-power, but that is running low.

During these situations the region buys electricity from other regions in China. However to meet their carbon emission targets, they have decided to put limits on industrial power usage which is affecting bitcoin miners.

In addition China’s third biggest mining region, Inner Mongolia at the border of the Republic of Mongolia, has taken a harsher approach in trying to phase out mining completely.

Authorities there have asked the public to report any bitcoin miner, noting that sometime they ‘disguise’ as datacenters, benefiting from lower taxation and energy prices.

The bitcoin network currently is running slower than normal due to this mining disruption, with sometime only one block found in an hour as opposed to the usual six.

As can be seen above, three hours ago just one block was mined, and only three were found four hours ago.

Suggestions are this situation in Sichuan is temporary and the network will return to normal, but it’s not clear whether the bitcoin crash has something to do with this hash fall as well.

Bitcoin had been falling for days before the recent hash fall beginning on May 16th, and continued falling to a brief low of $30,000.

That should lower mining costs, and so in turn aid the price due to miners needing to sell less bitcoin. Creating an equilibrium of sort.

Miners at time do keep on at a loss however, hoping an eventual bounce brings them into handsome profit, so it may be a combination of factors that caused this hash fall.