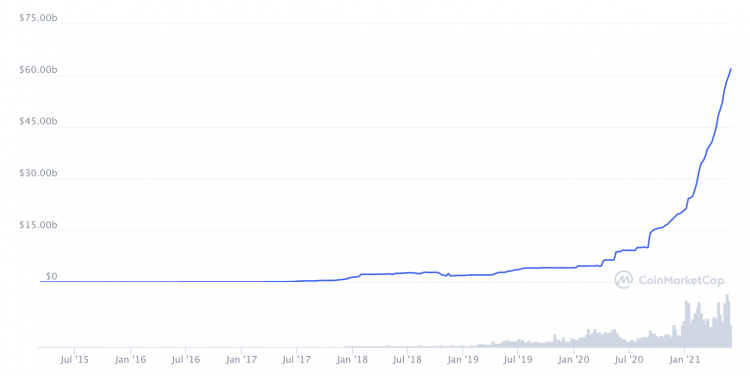 USD central bank digital currencies in a private market tokenized form are booming, reaching about 1.5% of the M0 total money supply at $100 billion.

Tether alone has seen significant growth as pictured above, up from less than $10 billion last year to now $62 billion tokenized USDt.

The fully regulated USDc run by Coinbase and Circle is the second biggest and this has seen huge growth too.

USDc was at about half a billion a year ago, now it stands at $22.5 billion in an astronomical rise of tokenized dollars.

A newcomer has jumped to $10 billion in the same timeframe. Binance’s bUSD was not even on the radar last year, opening 2020 at less than $20 million. Now it’s close to $10 billion.

Just these three in combination are now worth close to $100 billion. There are countless of others, most prominently the algorithmically pegged dai based on crypto collaterals.

Unlike the other three, this is a trustless stablecoin with the smart contract being a custodian. It has grown from just $100 million last year to now almost $5 billion.

There are many other tokenized usds. In the defi space especially, there are so many that it is easy to lose count.

While China therefore pilots plans to one day launch a yuan stablecoin to much fanfare, the usd stablecoin is booming globally in great part due to the private market finding and filling a need to much profitability.

There’s now gold stablecoins in auxt, and of course bitcoin tokens in wbtc. If we take the synths in synthetix tokens, then there’s Apple ‘stablecoins’ and Tesla and eventually presumably everything.

The primary reason is because they are globally accessible and transferable. That gives them an edge in opening the market to effectively the entire world.

So while China barks, the caravan moves on with one key reason for the success of these stablecoins being their organic private market nature which makes them fully responsive to the actual needs of market participants.