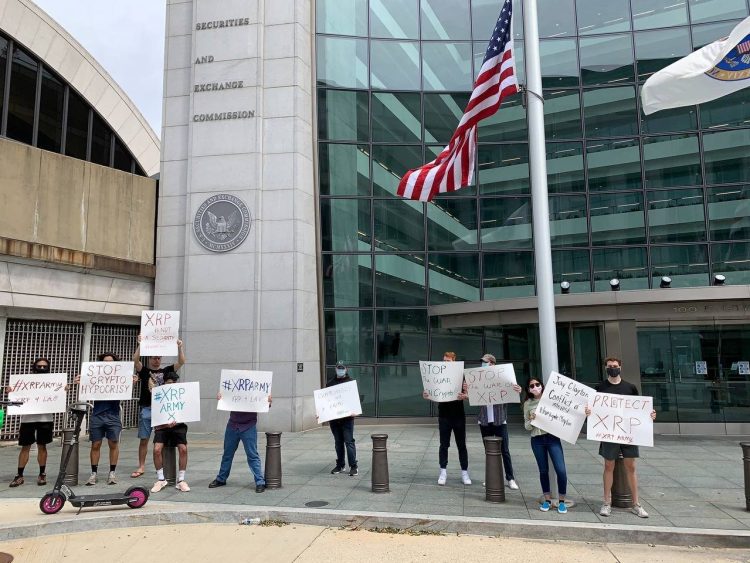 ‘Stop the war on crypto!!!’ So says what clearly looks like an American of probably middle to upper middle class in front of the headquarters of the Securities and Exchanges Commission (SEC).

He is joined by dozens of others like him, even a woman, in what may well go down as the very first political crypto protest.

They angry at SEC for claiming that the sales of $1.3 billion of XRP by Ripple and its executives from 2013 to 2020 constitutes an ongoing unregistered offering of securities. The seven years were, according to SEC, a violation of Section 5 of the 1933 Securities Act.

This matter is now to be decided by a judge as a court battle rages with Ripple disputing that it is a security, claiming it is a currency like bitcoin or eth.

They are now going through disclosure. The judge has ordered SEC to disclose pretty much everything related to the decision that concluded XRP is a security.

All this will take at least months, but the ramifications from a civil society perspective will be considerable as the decision goes to the root of investment prohibitions enacted nearly a century ago in this Securities Act 1933.

That creates a society of two classes. The rich, defined as anyone earning above $100,000 a year, are free to do whatever they please in choosing where to invest, including unregistered securities.

The rest are prohibited by the force of the law to invest in anything but publicly traded companies in the stock market.

This case is about Ripple offering its asset to all, including the plebs who are prohibited in investing on whatever they want, and in this specific circumstance it was 50% of the total supply and it was given for free.

Nowadays this is called the airdrop model. The most famous recent one is Uniswap which gave to anyone who used it 800 tokens for free. Those tokens are now worth about $16,000.

Once you create a market through this airdrop, then you raise funds by selling whatever supply you kept. This method of raising the funds is what is illegal, SEC is alleging, and whether it is indeed so will be the judge’s decision.

Making this not quite a Ripple case, but a class case, since it will affect any and all airdrops, and there have been far too many of them including Curve, Yearn, and effectively an entire new tens of billions industry with much promising growth.

With the stakes so high, it isn’t surprising some have taken it upon themselves to make their voice heard in the square.

And while their numbers are small, these are geeks. So by comparison, just two people showed up at MT Gox’s then HQ to protest in 2014 against their loss of a million bitcoin.

Now it’s 10 people, so a five fold increase in geek representation with the real battle of course at court and the even more real one at code.

That’s because this generation is unwilling to stand by these discriminatory investment prohibitions that choke innovation and stratify our society into incompetence by basically killing meritocracy through requiring innovators to fund themselves only from the upper class.

The invention of code levels the playing field and ultimately in this digital age the innovators don’t even need to be known with Nakamoto himself paving the way.

The court therefore will have to decide whether it is appropriate that the force of ancient law is weaponized against a completely new class of innovators, or whether the situation is so different from the age of our ancestors that Congress and only Congress should decide this matter.

For this is fundamentally political and such agency has no right to make law or interpret it, and therefore the judiciary should stand up to it.

Because the case does of course revolve around the facts, but ultimately it concerns fundamentally the very political balancing act of fostering innovation while prohibiting scams which are more a matter of criminal law.

And it also concerns the question of whether there should be one law for the rich and another for the rest in this digital age, an answer only accountable Congress can provide under the ultimate judgment of the citizenry.