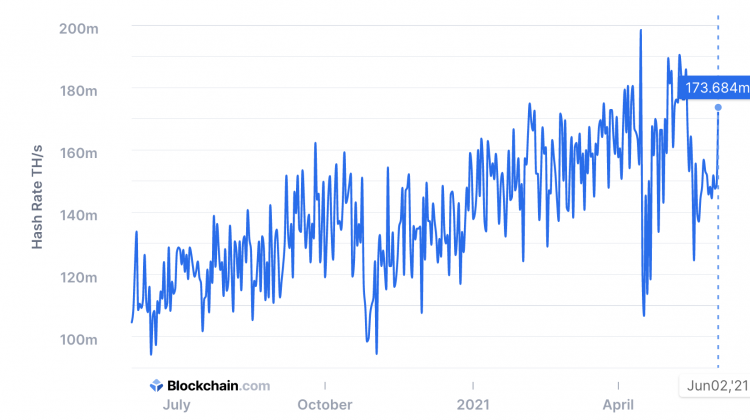 Bitcoin’s hashrate has almost fully recovered, rising from a low of 106 exahashes per second to around 174 currently as pictured above.

That’s close to the same levels prior to its fall at 180 eh/s, although it did reach a very brief 198 eh/s before dropping to near 100 in April and then again to 124 exahashes in May.

The drop was due to claims China was to ‘crackdown’ on bitcoin mining with Inner Mongolia ostensibly kicking out miners.

In addition the Iranian president went on TV to announce a temporary ban on bitcoin mining, but where raw data is concerned there is no evidence any of this has happened.

Iran in particular is thought to have 4% of the global bitcoin hashrate. That’s not much, 7.2 exahashes at 180 eh/s, but you can imagine enforcing such temporary ban would be very difficult.

That’s even if they were really willing to do it, which according to the unforgeable data, they probably aren’t.

With such a low hashrate share, however, one can’t easily jump to conclusions because western miners have been busy piling up asics datacenters with just Marathon recently announcing they’ve added 16,809 S-19 Pro ASIC miners this year.

So we can let Iran off the hook by suggesting it may well be other western miners have added 7 exahashes, so cancelling them out.

Where China is concerned, however, it appears very clear there is no crackdown at all, arguably not even in Inner Mongolia.

If there were, it would be visible as China has at this stage probably around 40% of the hashrate. That’s around 72 exahashes which is by how much the hashrate fell in April, while in May it fell by 60 eh/s or around 30%.

It is possible in theory that miners may have quickly moved either from Inner Mongolia to other regions, or out of China to other countries.

In such case they would have done so in about two weeks, which is possible in an operation Get Out: The Gestapo is Comming.

So however much we want to say China lied and little bulls died while hodlers maybe get to thrive, we may have also seen in action the powerlessness of the CCP to affect bitcoin except for very temporarily.

There is however a third version and probably the correct one. There were power outages at Sichuan bitcoin miners due to limitations imposed on industrial use because of dry season.

The bear hive then blew this out of proportions, with some low ranking official giving them bones to chew upon. And now two weeks later data reveals bitcoin either wasn’t banned or is unbanned in China for the trillionth time.

Meaning all we can conclude with some reasonable certainty is China has about 80 exahashes, or 40% of the network, and about 50 of it is in Sichuan and Inner Mongolia with Sichuan having around 30% of the hash as that’s where most bitcoin mining occurs.

Now two weeks later almost all of this hash is once again fully operational with China’s global share likely to continue falling primarily due to market forces pushing out any influence by the CCP.