Blockchenized Flying Cars, The Future is Near 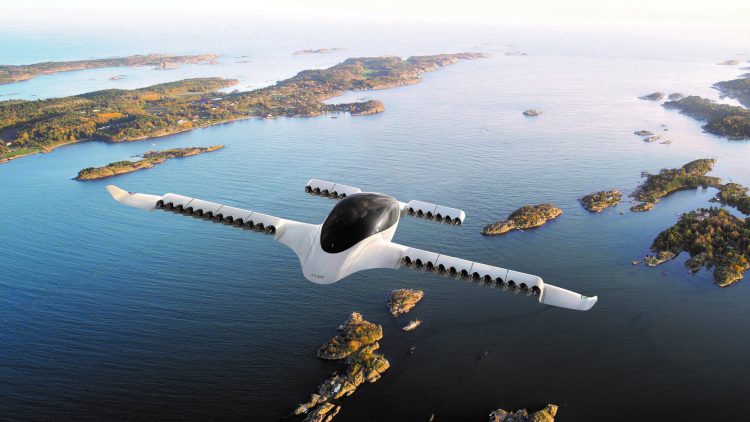 General peace dawns the globe once more, and after two decades of war when it appeared innovation was dead, it now looks like we can once again imagine our dreams.

The above pictured image is an actual real flying jet car that runs on electricity and makes almost no noise.

Lilium vertically takes off the ground, hovering like an helicopter, then propels forward with the power of its wings.

The range is just 186 miles, making it useful for traveling between cities. Paris to London could be one useful line for these air taxis, with the Lilium one requiring a pilot that can carry up to seven passangers.

The Chinese Ehang helicopter like design has only two seats, but it’s AI driven, reducing costs to that of production and electricity.

These are just two of some 300 startups imagining a new future where to fly is as easy as getting a taxi.

Drone technology is advancing so considerably that soon enough wars might not even have casualties, just bots fighting other bots like in a video game.

This is in part what has contributed to what feels like a new dawn in war politics. A dawn most fully symbolized perhaps by Putin’s blink on Ukraine.

Ukraine has drones, and that most certainly changed calculations because a raw numbers game had to account for a computer game.

This leap brings with it a new era and so our optimism that for perhaps at least a decade and hopefully a century, we won’t quite see war anymore in its brutal form.

This dawn of peace, for now perhaps imagined but hopefully real soon, will give us a brief window – although hopefully as long as existence itself – to not just imagine our dreams, but to build them.

The End of Brutalism?

This war technology is coming to civilians. The debut is expected to be at the Paris Olympics in 2024.

Volocopters and other flying cars will debut in hopefully still a liberal France in what may be the greatest show of the decade.

All of these flying cars startups have 2024 as the target date for becoming operational, making it potentially not just an air show to watch, but one to experience.

As they are green in being carbon neutral where the jet or helicopter itself is concerned, you’d expect something like the Grunde – which most probably will be in the next German government – not just to back them but to flush them with cash.

Because there’s a race on, and because of course we all want our toys in our own homes and our kids to play with their parts brought from dady after manufacturing hours.

Lilium is German, with some American startups being contenders too and of course Ehang leading the Chinese flock.

The latter are apparently moving faster because their bureaucrats are not as risk averse, but their entrepreneurs seem to have come up with what looks like a painted over helicopter, albeit running on electricity and an automated pilot.

So bringing us to a big theme, the clash between the priests of brutalism and the young ones wanting to be free.

The Unspoken War Between Bureaucrats and Techies

A generational change isn’t real without some tension between the old rulers and the new soon to be rulers in all forms.

A clash therefore is occurring between many government agencies and the new thinkers with SEC v Elon Musk arguably being the most visible.

Such ‘war’ began when an official of the Securities and Exchanges Commission (SEC) publicly said they won’t innovate for us.

That obviously raises the question: who do they think they are? And so the friction as new ideas greet old priests.

Where flying jets are concerned, any investor has to wonder what happens if there is an accident. Does Germany just ban the whole thing. Does it not even allow it to experiment out of the fear there might be some accident like autonomous cars have had.

Or is it more the case we are building a bogyman in the bureaucracy and we are self censoring by front-running what the priest/s might say.

Like kicking out a habit, one has to persevere against the body system so the body system can be sure you actually mean it, and you’re not changing its energy use willy nilly in coming up with new shortcuts (habits) that potentially unnecessarily as far as the body system is concerned require them to engage in non autonomous ‘thinking.’

Likewise the bureaucracy does not want change unless it has to, and it has to only if it is forced to change. Pioneers therefore need not fear the powerful powerless dance that is necessary, arguably, to whiff out meritless requests.

The proof being autonomous cars which naturally have had accidents, yet have not had the hammer. Risk so being existence itself.

Reducing jets to little flying cars and potentially in time making them affordable to all probably has the backing of much of society especially as it gets rid of noisy airports and crammy airbusses.

One can go further and add to these bots the ability to exchange value by giving them a smart contract controlled account that through feeds, sensors and wi-fi communicates to the charging station or indeed to the customer.

You could do this in a centralized form, like the gates of the Tube of London open by just touching your card. So too here the drone can open, but that requires a human action.

If the drone is at the charging station, it can’t touch a card unless there’s some human maintenance, adding not just cost but taking space.

The bot can however ‘talk’ to the charging station, but can’t quite move to it to physically do key exchanges.

Which is why the bot can’t have a bank card. The bot instead needs a smart contract, and through the rules of the code it can ‘talk’ to the smart contract over feeds and wifi so allowing it to pay for the electricity it needs at the charging station, and thus become almost fully autonomous.

In a few years therefore we may well see the dawn of cryptocurrency used as actual currency, as bots money, a field where something like eth is fully at home because it is among just code.

So crypto might not quite replace the dollar for humans anytime soon unless Fed engages in some reckless mismanagement, which we hope it doesn’t, but crypto may well be the money of new technology.

A poem thus, our very own. It’s called An Ode to a Golden Dawn:

Roar the world,
in pleasure delight,
for the colossuses,
of millennial light.

Raise your face,
and give us a smile,
the age of gods the mens,
roams countrysides.

The bombs that fly,
the last of time,
the generals, angels riihiseee
and see the smile
of peak violance,
the eid of terror
the end of hells.

Roar you world,
from axes shores,
das millenials
now in control,
with rage and hope,
dreams fool and wise,
to build this gloobe,
our paradise.

And tho we may, notin youth enjoyed,
in timee immorial,
we’ll be youthers and youth amoree;
and if the younger,
don’t follow wise,
we’ll come much sooner,
to cut the snakkkesss in this garden of paradise.

So roar you Yemen, the peace is near,
and in Damascus, the hope is here,
while eurup widdee amerikans,
greet the angels,
the man godssss haaavee come.

From shoooreees and qubikols,
the dark retreats forth,
as light rises once more,
in this dawn of gold.

Killed our hopes and dreams,
murdered our cities,
marching is the pen,
and the pen is winning.

For the sun has awoken,
and shines bright in his prime,
new age and new era,
Rejoicee thus, rejoice
Let’s party boys!