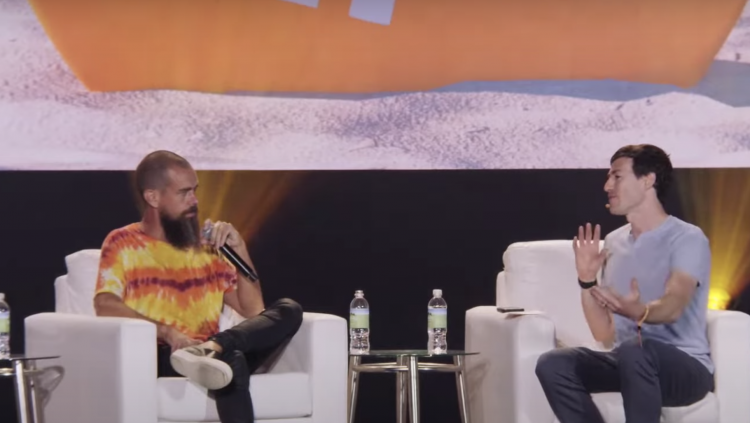 So said the CEO of Square and Twitter, Jack Dorsey, at Bitcoin Miami this Friday where he called bitcoin “100%” patriotic.

But it benefits the entire world, he said, revealing 500 bitcoin, worth about $18 million, had been donated to advance crypto development in Africa.

“If we’re going to create a money for the world, it has to be developed around the world, and anywhere there are gaps, we should try to fill,” he said.

It’s at that point Dorsey got heckled by a woman in the audience who called him ‘king of censorship,’ she said:

“How can you say that bitcoin is the currency for everyone in the world when you are the king of censorship. Bitcoin is about decentralization and you have no right to be here today speaking about this when you censor other people.”

“We’re working on that too,” Dorsey said while giving a look of confidence. “Can social media be more like bitcoin,” he was then asked by the interviewer, bitcoiner Alex Gladstein, the Chief Strategy Officer at the Human Rights Foundation.

“Yes – I believe it can. I know a lot of you disagree with our policies and I recognize the fact there are corporate and business incentives different for what might be needed for global communication for public conversation.

My goal is to remove as much as I can the corporateness of our companies and find better intersections with the open source community,” Dorsey said.

While speaking, some in the audience were saying lier, while Dorsey pointed out they recently launched an open source standard called BlueSky that he claimed has none of the Twitter restrictions and, inspired by bitcoin, “we want to do same thing with social media,” he said.

Addressing hecklers – “I know you not gone believe me, I know you’re saying lier, I’m gone prove it to you and then we can have another conversation.”

The interviewer Gladstein pointed out how the Lightning Network can potentially be integrated with social media to make it censorship resistant, highlighting in particular Sphinx, a new kind of Twitter like social media platform running on Lightning.

Dorsey also revealed Square is building a non custodian crypto hardware wallet, not to compete with other hardware wallets out there, but just to take it to next level, he said.

He further called central bank digital currencies ‘bullshit.’ We have a much better alternative in bitcoin, he said, designed for privacy and freedoms within it. “The sooner our governments can realize it and get in the boat, the better off we all are.”

He also said “Wall Street can’t and never will control bitcoin,” arguing that the more companies small, big, creating things for bitcoin, the more and more resilient it becomes everyday.

So closing this very interesting interview that reveals rather than just another CEO jumping on the bitcoin bandwagon, he’s actually a true believer in peer to peer digital cash to the point he claims he’d even leave Twitter for bitcoin.