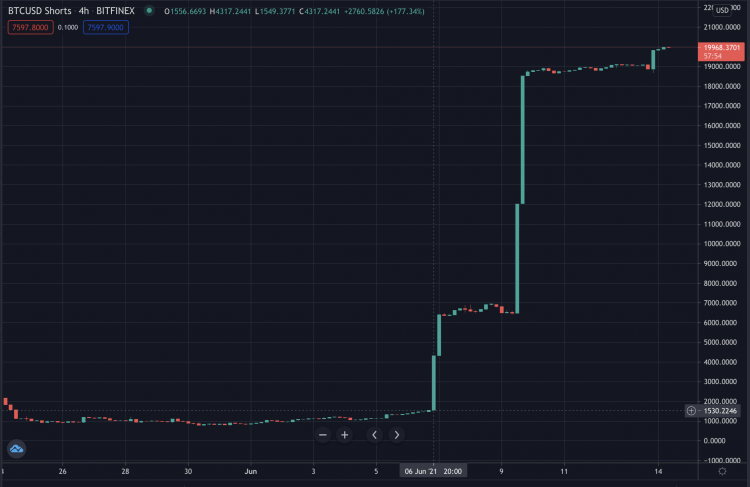 Someone shorted the bottom with bitcoin shorts seeing a significant increase on the sixth of June while price was $35,000.

A big increase then occurred on the 9th of June as bitcoin started recovering from $32,000, and then another small jump was seen yesterday.

Overall shorts on Bitfinex jumped from 1,500 on June the 6th to nearly 20,000 bitcoin currently as can be seen above, worth some $800 million.

As this is Bitfinex, these shorters are probably on low leverage, maybe 3x or thereabouts. So they might not be at risk of a squeeze any time soon.

However if the price continues to move against them, then that will increase pressure on these shorts, so some might close voluntarily.

Shorting as you might know is betting the price will go down by borrowing bitcoin to sell for USD. If the price does go down, then you would have made some dollar profit by buying the borrowed bitcoin cheaper to repay it, keeping the difference.

If the price goes against you, your dollars now can buy less coins, with the borrowed bitcoin becoming more expensive. At some point, based on the amount put down as collateral, you either buy it at a loss or are forced to buy the bitcoin by the system once all the collateral you have left is only sufficient to cover the cost of buying the borrowed bitcoin you sold.

This act of buying itself then adds to the momentum of the upwards price movement, with new shorters or those with more collateral coming under pressure, so causing a cascade of buying through forced or voluntary liquidation of shorters.

That’s especially in instances like this one where there are big positions at the lower range of price movements as they could give bulls a push to cross resistance.

The individual or individuals shorting so low probably thought bitcoin was going to go to $20,000, and now may well regret that decision, but whether they’ll hold on and risk liquidation, or cut the losses themselves and so give the price a boost, remains to be seen.