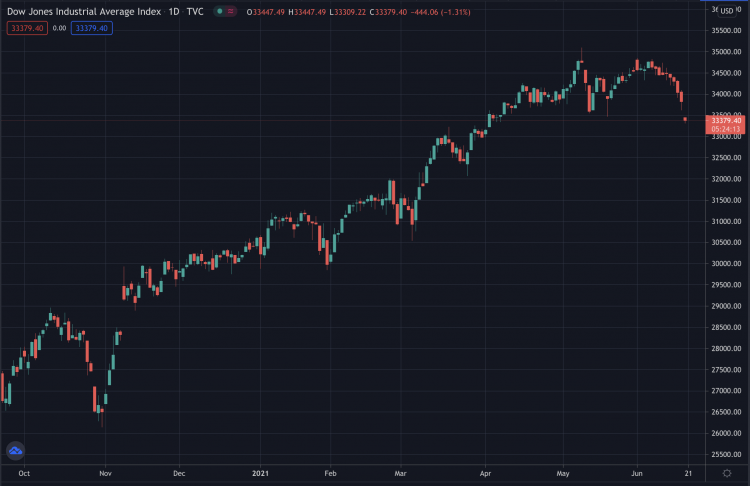 Dow Jones has fallen by about 1.4% today in a generally red market across stocks, commodities and cryptos.

Gold was having a spring mini-bull run, but it’s down from its high of $2,075 in August with it seeing a fairly strong correction for the ostensibly stable asset.

The zoomed out chart above picks off during the yuan devaluation following the Trump tariffs on China.

CNY, unlike the dollar or the euro, is not a free floating currency but a soft peg to the dollar at a very undervalued rate for yuan.

So when Trump imposed 10% tariffs, the central bank there just devalued CNY by 10% with America not quite responding in a similar fashion, leading to China effectively cancelling out the tariffs.

The economic collapse in the west during 2020 while China fully opened its economy let to a policy of allowing a yuan appreciation, with the dollar so falling from 7.2 cny to usd in May 2020, to 6.35.

Yesterday however it jumped to 6.45, one of the biggest one day move since March 2020 as the dollar clearly strengthenes.

That has led to a record $755.80 billion parked with the central bank in cash, a sum expected to hit one trillion.

Fed has further ‘penciled in’ two base interest rate increases in 2023, something that suggests they might tamper off the $120 billion bond buying sooner than expected, perhaps as soon as this December.

This potentially new aggressive policy might raise questions about the affordability of interest debt payments by governments and corporations that have gotten deeply in debt during 2020.

It may also raise questions regarding misalignment of incentives as it may send funds towards parking in cash, a useless yield generating activity if interest rates are increased that takes away from investing in research and development or in funding startups.

Joe Biden so far has stayed out of the arguably biggest decision in the United States regarding the potential move towards strengthening the dollar, with Powell himself thought to be a hawk that was kept in check only by Trump shouting.

One has to consider therefore the risk of another Greenspan concert, as well as the potential distorted Fed incentives to prioritize banks over the economy or the government.