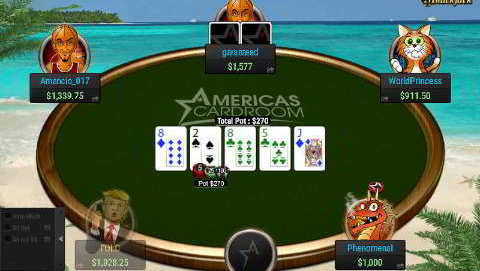 The rise of cryptocurrency is easily one of the top financial stories of 2021.  Just visit any reputable news site and brace yourself for endless stories about how crypto stands to revolutionize the world. With everyone from Elon Musk and Jack Dorsey to Tom Brady and Snoop Dogg extolling the virtues of crypto, you wouldn’t be alone in believing that Bitcoin and other blockchain assets are entirely mainstream.

Yet if you actually try to use Bitcoin at your local gas station or Ethereum at the neighborhood liquor store, don’t be surprised if you get laughed off the premises. The truth is cryptocurrency is neither as versatile or widely accepted as the crypto community would have you believe.  Fortunately, patience is a bit of a virtue here as wider adoption takes time.

Still, it’s nice to know that one company is more than doing its part to help crypto go mainstream.  Popular poker site Americas Cardroom (ACR) not only constantly sings the praises of cryptocurrency, but it has been welcoming and promoting blockchain assets since 2015.  That’s when the global poker site processed its first Bitcoin transaction.

Americas Cardroom’s early openness to blockchain technology was no accident.  While the site is widely celebrated for innovative promotions like its record-breaking Venom tournament, Americas Cardroom got aboard the Bitcoin train out of sheer necessity due to the way it does business.

As an international poker site, ACR proudly welcomes players from most continents.  While that’s wonderful news for players looking to enjoy the world’s most popular communal card game, the company has to deal with what amounts to a mishmash of competing laws and statutes.  What’s even more complicated is that many of these laws are subject to interpretation and change all of the time. In addition, traditional financial institutions such as banks and credit card issuers, tend to err on the side of caution when it comes to processing transactions.  It is not uncommon for banks to refuse service to poker players, even in jurisdictions where online gambling is perfectly legal.

While the banks’ refusal to process transactions is certainly frustrating for Americas Cardroom and similar businesses, it’s players who pay the biggest price.  Just look at any poker forum or browse any social media site and you’ll likely encounter complaints from players who can’t deposit.  What’s aggravates players further is the inconsistency of it all.  Some players can deposit day after day with little issue, only to discover that a bank has blocked their credit card from using that same site a few weeks later.  And when it comes time to get paid, financial institutions have a history of arbitrarily holding payments or simply poking their nose where it doesn’t belong.

The good news it that Americas Cardroom has been circumventing the heavy-handedness of legacy financial institutions with Bitcoin.  Naturally players appreciate the powers of the blockchain, as is evidenced by the fact that crypto made up just 2% of America Cardroom’s transaction in 2015 and now accounts for 60% just six years later.

At Americas Cardroom, payment flexibility is the name of the game too.  Depositors can still use credit cards, debit cards, and money transfers in most jurisdictions. Nonetheless, players do prefer having 60 different crypto options for both deposit and withdrawals, including Bitcoin, Ripple, and Ethereum.  For the sake of simplicity and stability, Americas Cardroom conducts all its games in US dollars.  That’s excellent news for anyone who is concerned about the volatility of cryptocurrency.  Let’s face it.  Nobody has time to deal with complicated conversions while they’re trying to concentrate on the game at hand.

At ACR, when a player deposits crypto, the site’s Cashier instantly converts the funds to US dollars.  This bankroll can then be used to play poker, slots, and table games or take advantage of the integrated sportsbook.  When it’s time to get paid, ACR coverts the funds from US dollars to crypto.  Once the crypto reaches the player’s wallet, they can save it, spend it, or move it to a bank account.  Players who find the process confusing shouldn’t fret.  The site has invested heavily in tutorials and customer service staff that can guide anybody, even those who generally lack technical knowhow.

Americas Cardroom is by no means the only site that accepts crypto in 2021.  Yet they are years ahead of the competition, both in terms of infrastructure and player loyalty.  Plus, ACR frequently adds new cryptocurrency options as new methods become popular in the broader crypto space.

ACR isn’t shy about admitting that cryptocurrency has been instrumental to its success.  The site continues to grow on a weekly basis both in terms of player traffic and the amount of cash available to be won.  Even the site’s signature tournaments exceed their guarantees, including the recent $5 Million Venom PKO.  The industry’s biggest progressive knock out tournament knocked everyone’s socks off with a final prize pool of $7.16 Million.  And you can certainly thank cryptocurrency, at least in part, for that.

The further rise of crypto will certainly bode well for Americas Cardroom.  Yet without early adopters and advocates like Americas Cardroom, cryptocurrency wouldn’t be thriving at all in 2021.  Given the company’s track record, you can expect even more innovations, including in the realm of crypto. We look forward to seeing what ACR does next to expand the game of poker.  As fun as poker is, it’s apparent that the site means business thanks to crypto.