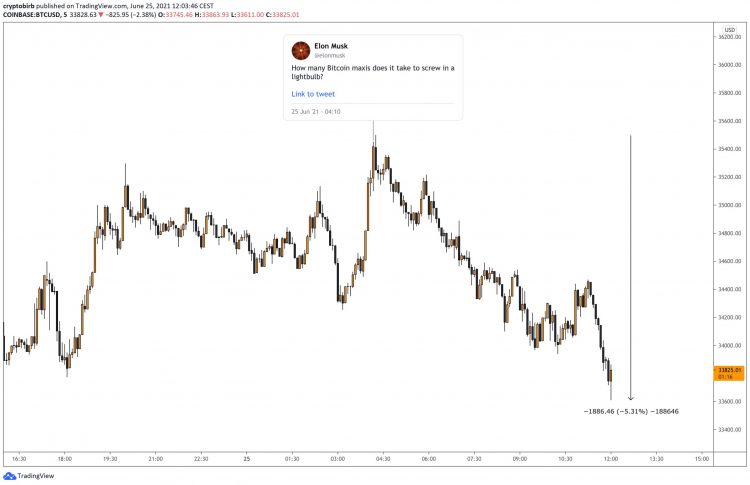 Elon Musk has tweeted about bitcoin again and that was enough to send the price down by 10%!

“How many Bitcoin maxis does it take to screw in a lightbulb?” – Musk tweeted at evening before adding “‘That’s not funny!’ – Bitcoin maxis.”

But why? Well presumably because you have sentiment bots that decided this was a negative tweet. In addition Musk has not tweeted about crypto for some time, so him tweeting again is kind of bad news at least as far as the market price action is concerned.

The timing of the tweet is also interesting. Just as bulls were intensifying their fight with the bears and eth was flirting with $2,000, this guy opens his mouth up and interferes in the market process.

What’s in it for him? What does he get out of it? Is probably what plenty are wondering. Why was he tweeting just before bed instead of spending time with his son or Grimes or friends? He has friends right? Was he drunk? Are Tesla’s Q2 results so rubbish he distracting with bitcoin?

Or maybe he thought he was helping, but condemning the concentration camps in Xinjiang and the kicking out of miners would be a lot more helpful.

According to the Tech Transparency Project, a Tesla supplier Lens Technology used forced labour by Uighur workers from the predominantly Muslim region of Xinjiang.

Instead of dealing with such issues and many others, the world’s richest man in command of an army of workers at Tesla and SpaceX, spends his time making ‘jokes’ on Twitter during sensitive times for the crypto market.

Perhaps he gets a kick out of the illusion that he has so much power and influence, but there’s a reason why rule number one of power is to appear weak when you are strong.

The reason in this case being whether the government through subsidies is not distorting market forces to provide too much power to one supplier.

There are many EV producers who probably don’t receive as much subsidy as Tesla, distorting competitive forces at the expense of the general public which is not offered as much choice as it should be offered by the market due to this government policy of picking winners and losers.

Muskies brush off any criticism by bringing up big bad oil and their alleged secret agenda to destroy the clean cars market, but that doesn’t work anymore when Tesla’s market cap brushed with $1 trillion at one point.

So collectively we need to think a bit whether we are not misallocating resources by giving people like Musk too much power, starting with perhaps enforcing those anti-monopoly laws as Tesla is clearly a monopoly in US where electric vehicles are concerned, a monopoly that allows them to charge far too much for a car while also affording Musk the luxury of trolling instead of working.