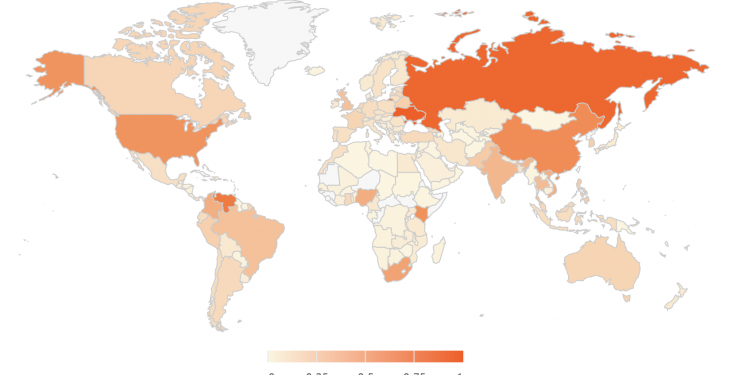 Out with China and in with India as well as the entire developing world which has this 2021 turned the map from gray to much color.

India is the biggest political victory in this space so far where ground developments in 2018 around their beaches suggesting something cool could happen here, were shattered by a diktat from their central bank.

The then little noticed development did not escape the attention of these pages which covered every twist and turn, including the decisive argument that the central bank can not ban cheeseburgers, and therefore can’t ban bitcoin.

Now, the bitcoin industry in India is going from strength to strength, with the country as a whole making $240 million in realized bitcoin gains last year.

A small sum for a vast country, but the historic Supreme Court decision to strike down the central bank was made only last year, and in showing how slowly information can travel, the central bank there reminded commercial banks just last month of this decision, ordering them to provide uninhibited crypto trading.

This revelation of a functioning rule of law in India may well bring back buzzing blockchain beaches, and this is just the start of a very big story that is somewhat unnoticeably enriching the bitcoin landscape.

Turkey, a rising regional power with a home grown industry and very big inflation as well as pinching currency movements, began dabbling in bitcoin in 2018 and now is at what we speculate might be America’s equivalent of the 2013 bitcoin adoption wave.

That is, and we are speculating, the Turkish students have gotten hold of this and so an unignorable movement has began that naturally bridges political divides with plenty of Erdogan bitcoin supporters as well as of the opposition.

As elsewhere, they’re generally independents and focused on the digital economic upgrade of money and country.

Iran, unfree as it may be and cordoned, is nonetheless very tuned in, with an unknown bitcoin scene there placing this country on the map due to plenty of hints as well as official statements that bitcoin is going places there.

India is a bridge to a less covered, but we suspect important upcoming place that has Indonesia, Malaysia and that whole bit there show itself.

Neither of the above mentioned have reached the stage of nice stories detailing developments on the ground, but in this digital age, that something is happening is undoubtable.

This corridor, from London to Sydney through the above mentioned countries, is a revelation for it isn’t talked off or categorized as such, but nonetheless seems to hold massive economic power and potential with each country having the characteristic of being a bridge of sorts.

A more interesting revelation might be that Ukraine, out of all countries in the world, is the biggest adopter of bitcoin according to Chainalysis which reaches conclusions based on blockchain data.

That’s proportionally of course to Ukraine’s population with the war-ish country revealing in legally mandated disclosures that lawmakers, civil servants and the like have 45,000 bitcoin.

Even more surprising might be that according to these blockchain data, Russia is number two.

We hear almost nothing from Russia however, probably in part because this is a country that has exiled even their tech wiz, Pavel Durov, in an obviously unsophisticated distinction between political rubbish and hard tech.

In addition it isn’t quite clear how Chainalysis is attributing blockchain data to a country, but they say Venezuela is number three and China is apparently still at number four.

Where we start questioning this data is the rank of Kenya as number five because we’ve heard pretty much nothing from Kenya, but if it is proportional to the country, then it may well be right.

In a different sort of ranking, again by Chainalysis, we can see a more impactful categorization based on net gains from bitcoin.

USA is the biggest economy and by far where a country is concerned, with it more importantly also being the earliest bitcoin adopter.

China, for all their communist party might say or even do, remains a big bitcoiner at the grassroots levels with it to be seen how that might change after they kicked out the miners.

Japan has been an unspoken part of the bitcoin story since kind of the beginning with Roger Ver living there when he began bitcoining in 2012 as well as the first global bitcoin exchange, the now defunct MT Gox, established in Tokyo.

Much of Europe is then sprinkled with newcomers such as Turkey, Brazil, India, as well as the 2017 class of South Korea.

Interestingly though Argentina makes it to top 20 with plenty of indications they were going bitcoin, not least because of their galloping inflation, but just how much is being revealed only now.

Thailand is a cute country as far as these pages are concerned with some big opposition leader there mentioning blockchain in 2019, the Thai SEC making some bizarre announcement in the same year, and the archive reveals there was even some navy cryptonian arrest again in the same year.

Making this an interesting country that was already on the bitcoin radar, unlike Vietnam which surprises with this significant ranking even above Turkey. Chainalysis says:

“While Vietnam has seen extraordinary economic growth over the last 20 years, cutting its poverty rate from over 70% to below 6% since 2002, the country ranks 53rd in GDP at $262 billion and is categorized as a lower-middle income country by the World Bank. However, Vietnam has a high level of grassroots cryptocurrency adoption, ranking tenth overall.”

El Salvador’s declaration of bitcoin as legal tender is part of a far bigger story that speaks of the significant widening in bitcoin adoption with it taking a more global dimension beyond the previous dominance of America and Europe as well as China at one point or South Korea.

America and Europe still dominates and by far with the two combined having an economy 4x bigger than China and vastly more skills as well as talent, in this space and others.

But they’re no longer the only game in town. The New York v London 2014 crypto competition, which then became USA v Europe in 2018, has now grown to a far richer variety of global adoption.

This is of course very new, and in many ways only precisely now do countries like India, Turkey, or Indonesia, make themselves felt to observers, in particular these pages.

There’s a distinct change in intensity that highlights the importance of these new countries as well as the many ground developments that must be going on there.

As a global currency, naked and untouched, still very much at the ground level with no hierarchy or real barrier at a technical level, bitcoin is yet another attempt to upgrade the capabilities of the entire globe towards meritocracy first.

This offers a half-centenial opportunity to many countries and its best, and if we are to think of money alone rather than innovation in general, it offers an opportunity that so far has come only twice in a millennium to upgrade.

The measures of GDP and the rest therefore may be less important than the random chance of meritocracy at a country at the right time and of course with the right will.

Because as Argentina has shown with its richness in the late 1800s, the past is not necessarily the future, richness is not a static line but a revolving corrousel.

And while systemic barriers remain, they might be weakened and perhaps fully because reality appreciates the meritocratic grasp of objectivity.

So we welcome the 2021 class of meritocracy, and its immense diversity in circumstances and thus thought, and offer them nothing more than this: the code will set you free even if you are in chains.