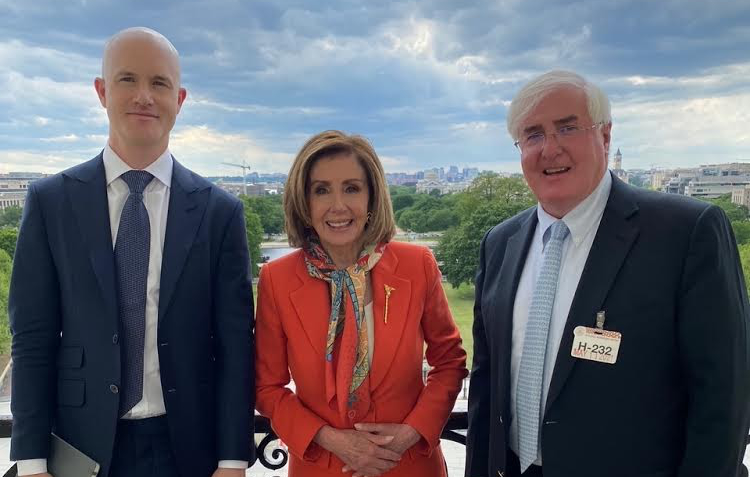 In a tour of Washington on May 11th, Armstrong met numerous politician and leaders of federal agencies, including Speaker Nancy Pelosi (pictured) and former speaker Paul Ryan with Armstrong emphasizing a bipartisan approach or political neutrality.

According to Fed’s calendar for Chairman Powell, he also met Armstrong on May 11th, with Coinbase not elaborating further beyond public statements by Armstrong around the time. He said:

“I relayed my thoughts on China and their central bank digital currency. It is real, they are moving quickly on it, and I believe it represents a threat to U.S. reserve currency status long term if the U.S. doesn’t move quickly to create their own.”

There are no minutes of the meeting with it unclear what exactly they spoke of, and there is no public picture of the two, but Armstrong is in charge of the Coinbase-Circle run USDc stablecoin.

This has grown to a market cap of $25 billion, with it ranking eighth out of all cryptocurrencies in an incredible pace of growth from less than half a billion last year.

In many ways this is an organic private market issued central bank cryptocurrency or digital cash, with it running on the decentralized and untamperable ethereum public blockchain.

Like ethereum itself, USDc is pseudo-anonymous, global, permissionless to some extent because the smart contract does grant the operator some privileges, but in most ways it is like bitcoin.

Thus from Africa to China and across the world, people trust this tokenized dollar for use primarily in trading, but now people even ask if you accept payments in USDt, a competitor of USDc.

In combination the two have a circulation of $87 billion, something that could easily reach a trillion in the time frame of even half a decade because it meets a real need across the globe for traders especially in arbitrage.

At the scale of a trillion, someone like Powell may well wonder how this would affect his job, and how the Fed can in effect extend its own capabilities by accounting for this private market led upgrade of the dollar.

Thus while there are no minutes, we can probably roughly guess to a decent extent what they spoke of, and if we’re to use the ‘reasonable man’ standard, you’d think the conclusion would have been that Fed is probably happy to let the market do its thing, and maybe even is happy to offer any help if it’s needed.

Because this effectively establishes a new global digital dominance for the dollar, which something like yuan has zero chance of challenging either in a top down or bottoms up form.

In top down because this system would have to be so controlled that it would amount to no different than current yuan with pilot participants already saying as much, and current yuan is unappealing internationally because it is artificially soft pegged to the dollar at an undervalued rate, it has capital controls, and it has a fragile system of governance where the generational transfer of power is feudal.

Bottom up, there have been attempts and if China was more open to cryptos they may have been a bit more successful, but to understand why they have failed is maybe better to speak of the euro which is a peer of the dollar and sometime has further strengths, like not devaluing as much.

There is a market for EURc or t and now in defi they’re bootstrapping something very new, a code based forex which in practice will probably mostly be run by bots.

This new defi frontier could counteract what we’ll call collective inertia created by network effects that arise from the first movers advantage.

There are plenty of reasons, including that the euro often is a better stable store of value, but there are bootstrapping costs and opportunity costs which collectively create this inertia of just use the dollar with the advantages so needing a collective threshold.

Individually however such costs may be different than collectively, and a group of such individuals can be very substantial, but they’re unable to act because there isn’t the opportunity in a chicken and eggs of sorts.

The defi forex market can square that circle because it bypasses exchange operators and trading pair decisions to put matters on the hands of the market, or bots more precisely.

It’s not clear whether there’s much room for the rest however, which is why China’s decision to ban crypto exchanges and now crypto mining may have long term effects for the country as it has effectively barred itself from a financial frontier that will most likely in a decade or two be an integral part of the toolbox found in any financial powerhouse with places like New York, London, Amsterdam and Frankfurt to some extent already beginning such integration.

We suspect Shanghai has too as they probably completely ignore the CCP, but the digital dollar and maybe soon the euro too is the one taking off to the point that in effect the past and the future meet for the first time in what must be an implicit green signal for the accommodation of our upgrade of money.