Did Grayscale Pump and Dump Bitcoin? 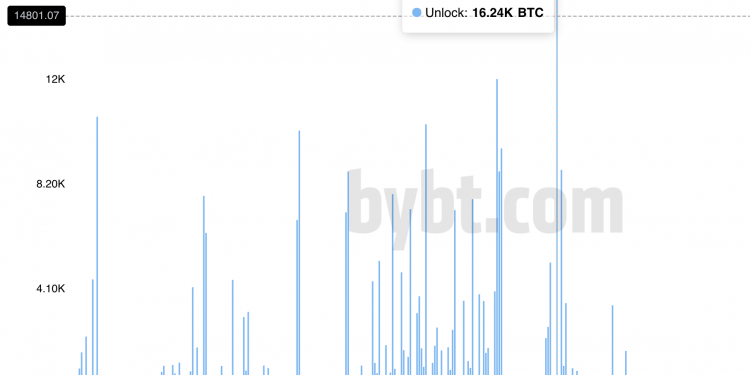 This sum grew to half a billion a week in December, and then broke a billion dollars in January 2021.

Minters of these shares – individuals that qualify as accredited investors or institutions – had to hold them for six months before being able to sell them in the open OTC Markets.

Those six months are up, and just as we saw an increase in volumes from November to January, we now see an increase in unlocks from May to July as pictured above.

That somewhat corresponds to the rise in bitcoin’s price and then its fall during the same period of six months with 25,000 bitcoin, worth about a billion dollars, to be unlocked between July 17th and 19th. Thereafter unlockable new sums reach zero.

GBTC’s share price had a significant premium of 40% over the spot price in December, with it continuing at 32% in January before falling to 10% the same month. Now it’s at a discount of 12.78% and in May it reached as much as -22% over the spot price.

There was speculation a significant amount of the share minting around six months ago was aimed at arbitraging this huge premium, with inflows drying up in February just as the premium reached zero, to then turn into discount the same month.

Since then there have been only outflows in bitcoin amounts, but only small sums of between 35-100 bitcoin. Yet this outflow has been continuous and almost daily.

Part of it may well be Grayscale itself is buying up shares to then redeem them for bitcoin, so reducing total supply by ‘burning’ shares.

That can be an unvirtuous cycle because if those bitcoins are sold and price falls, GBTC becomes even less attractive, leading to more bitcoin redemption until some balance is found.

That balance can be provided by investors speculating where bitcoin’s price will be in six months. If they think it will be above current price, rather than buying spot bitcoin they may just buy GBTC shares as GBTC shares are backed by bitcoin and can be redeemed for it. So this would be a somewhat roundabout way of buying bitcoin at a discount.

However this wouldn’t affect bitcoin’s price positively until a premium in GBTC shares arises, at which point holders can benefit by that creating incentives to mint GBTC shares, which translates to the buying of spot bitcoin as the shares are backed by actual BTC.

This new dynamic might arise after next week as there won’t be much more shares unlocking thereafter, and thus the new supply will eventually find a balance after which minting – effectively buying spot bitcoin through a stock wrapping – makes more sense than either buying shares or spot bitcoin directly.

The latter especially applies for institutions which have significantly more freedom in capital allocation towards equities than commodities.

Those institutions were the primary driver of the surge in GBTC minting, with bitcoin’s price reflecting that rise in demand.

However the six months lockup period for GBTC and the distinction between accredited investors and everyone else may interfere with supply and demand in a somewhat manipulative manner that might not translate to a full pump and dump, but does add intensity to both bull runs and bear dives.

These institutions now have many choices in Canadian ETFs and European ETNs which probably have taken quite a bit out of Grayscale demand, something that may itself have contributed to the discount.

These ETFs and ETNs don’t have the six months restriction and generally don’t have a distinction between accredited investors and everyone else, thus continuously and naturally reflect the balance between supply and demand.

Some of them have reached $1 billion in market cap, but Grayscale remains the biggest by far at $22 billion.

That’s a small amount however compared to bitcoin’s market cap of $622 billion, but most of Grayscale’s inflow was during a short period while the outflow has been gradual and continuous for now months in both direct btc redemption and in providing a discount over spot buying through their shares, which takes some demand out of the physical bitcoin market.

Yet Grayscale itself didn’t create the premium or the discount, demand for bitcoin did, but its artificial and somewhat manipulative design may have created to some extent a pump and dump like movement over six months with it now to be seen whether a floor has been found and thus a more natural balance between supply and demand can take over.