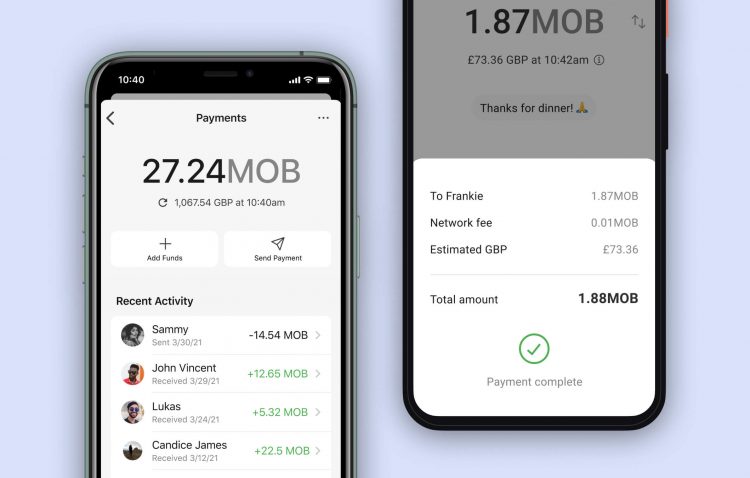 A recently launched crypto that is advised by Signal’s founder, Moxie Marlinspike, has seen a 10x spike in its valuation following a new funding round.

General Catalyst and Future Ventures participated in the funding round according to unnamed sources by a new media outlet, the Information.

The $75 million fundraising values the company at $1 billion, significantly higher than the $81 million valuation back in March when it raised $11 million.

Mobilecoin is also publicly traded on FTX with its circulating supply unknown, but its total supply is claimed to be 250 million coins.

That puts the publicly traded fully diluted market cap at $2.7 billion based on the current price with it seeing a huge spike in April after Signal announced they were integrating it in a pilot within UK.

“We’re starting in the United Kingdom, but will expand the beta as we get more feedback,” said at the time Jun Harada, Head of Growth and Communication at Signal.

The crypto itself incorporates different technologies with its whitepaper abstract stating:

“MobileCoin is a standard one-dimensional directed acyclic graph (DAG) cryptocurrency blockchain, where blocks are consensuated with an implementation of the Stellar Consensus Protocol, transactions are validated in SGX secure enclaves and are based on elliptic curve cryptography using the Ristretto abstraction on curve Ed25519, transaction inputs are shown to exist in the blockchain with Merkle proofs of membership and are signed with Schnorr-style multilayered linkable spontaneous anonymous group signatures (MLSAG), and output amounts (communicated to recipients via ECDH) are concealed with Pedersen commitments and proven in a legitimate range with Bulletproofs.”

Stellar uses a modified XRP consensus model with XRP’s model found to be flawed in that consensus can’t be reached without some centralized control.

It’s open source and because there is no coin distribution with it all minted on day one in an Initial Coin Offering (ICO) of sorts, it doesn’t need to use Proof of Work, instead using erm… Proof of Intel?

It claims to be private with their github stating “ownership of a utxo in the MobileCoin network is equivalent to knowledge of two private keys, called the spend private key and the view private key, that provision control over discovery and transfer of value. Most users will derive these two private key values from a single underlying key we call the root entropy…

The public blockchain is a zero-knowledge data structure that consists only of utxos, key images and block metadata used to ensure consistency and to construct Merkle proofs.”

There’s no blockchain explorer as far as we can see, and they require ‘watcher nodes’ to keep an eye on validator nodes with it quite unusual that a node itself can’t tell circulating supply.

You should be able to at least see the genesis block and how much is in it, thus derive circulating supply by how much has moved out, with this a new mainnet, and thus a lot of the claims are still to receive scrutiny.

But its connection to Signal make it stand out as the app has 40 million monthly active users, something that can potentially make mobilecoin a new experiment in crypto-apps integration.

However it’s not very clear why Signal chatterers will want to use mobilecoin for payments considering its volatility and the bootstrapping problem that comes with a new project, when they can use the far more established bitcoin or USDt tokens.

Their pitch would probably be that you get a Signal crypto for your Signal app with the same level of privacy you can trust, but when it comes to crypto, it’s not very clear Mobilecoin’s design is one you can trust at a technical level.

That includes the very basic of supply validation – ensuring Mobilecoin Inc. can’t just print out a trillion new tokens – and the more sophisticated question of whether this is really as private as it claims.

In addition if Signal limits itself to just mobilecoin, there’s the more political question of crypto walled gardens with it unclear whether end users will want to participate in their formation.

And then there’s the biggest question of them all: why do they need this $75 million private round when they raised and are raising funds publicly by selling their crypto.

Will this Inc. and crypto distinction lead to a divergence of interest in due course and more importantly will users be able to fork off?

They couldn’t fork off from XRP. Until Mobilecoin chain-splits or they demonstrate a chain-split themselves, we’ll assume they can’t fork from that either, and if they can’t fork then it isn’t quite a decentralized crypto but a controlled token.