ETH Crosses $3,000 as Crypto Bill Goes to the Wire 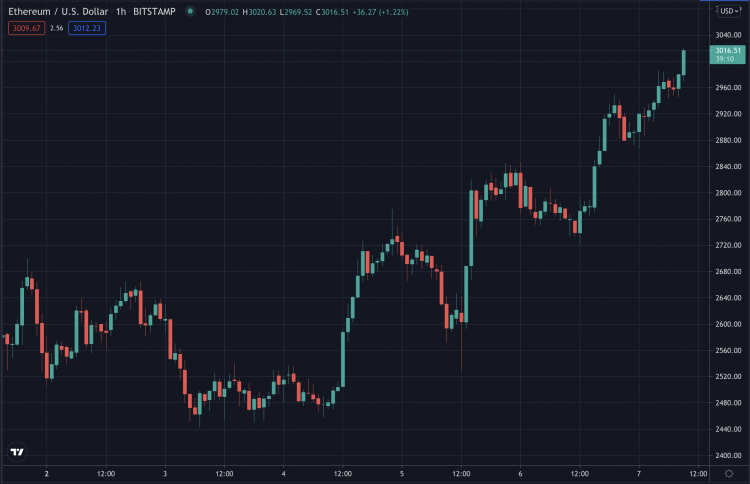 The first national level crypto law in the world is to be voted on later today at noon Washington time with this space facing its 90s internet moment.

Will Congress decide to let innovation thrive, or will it instead knowingly pass an act that effectively bans the publishing of code without a license while also bizarrely exempting only bitcoin validators and no one else, like IPFS validators.

“Decentralized hosting networks such as the Interplanetary File System (IPFS) use cryptocurrencies to pay users who provide storage space to the network. IPFS hosts files in exchange for filecoins, which are distributed to users who offer the network storage space on their computers. The protocol hosts speech across a distributed array of servers, it isn’t controlled by any central authority.

However, if each transfer of filecoins in this process makes the facilitator a broker, taking part in the IPFS network will become administratively burdensome. While intended as a revenue generation provision, expanding the definition of a cryptocurrency broker will make it more difficult to compete with ‘big tech,'” says Will Duffield of Cato institute.

The amendment by Mark Warner (D-Va.), Kyrsten Sinema (D-Ariz.) and Rob Portman (R-Ohio) is so bad that the Hill has called it “no compromise at all.”

“For many crypto innovators, there is simply no way to comply with these rules because, for example, they only write the underlying code that facilitates a transaction; they do not have access to the information this amendment would require.

This means they’d be forced to take their business, and the jobs and economic growth they support, overseas to jurisdictions that do not have such impossible-to-comply-with tax provisions,” it says.

The backlash has been intense with the crypto space awaiting this moment since last year.

“The fact the crypto industry has forced a delay on arguably the largest policy priority of the Administration (outside of COVID) is a testament to the strong lobbying forces in play. We are working together and to say we haven’t slept much in the past week is an understatement,” says Ron Hammond, Director of Government Relations at the Blockchain Association.

That’s because the stakes are high as the Biden backed amendment by Warner does not do what Portman claims it does. Portman said:

“The legislation does not impose new reporting requirements on software developers, crypto miners, node operators or other non-brokers.”

That is not true where his amendment is concerned as it does impose reporting requirements for smart contract developers and non Proof of Work validators like IPFS operators or eth stakers.

“Do what you say you’re going to do,” said Cynthia Lummis, whom together with Ron Wyden and Patrick J. Toomey has put forth an amendment that this space backs. “Our amendment protects miners as well as hardware and software developers. The other does not. The choice is clear,” she added.

The entire crypto space has been calling and writing to Senators, some doing so live on their twitches and teamspeaks with it united for once as it affects all cryptonians.

The right to publish freely on the open source blockchain networks must be upheld, for this generation and the ones that come after.

That is what is at stake, and under the threat of prison, with cryptos so awaiting whether it will have its 90s internet moment, or whether instead America is no longer quite free.

There will probably be livestreams of the vote, with bitcoin and eth currently rising presumably in anticipation of the Lummis amendment passing.

If it does, then that should be very bullish because coders will be free to go on ensuring that Libor style cheating can never happen again at a technical level by rewriting the rules in immutable open source code we can all read and write.