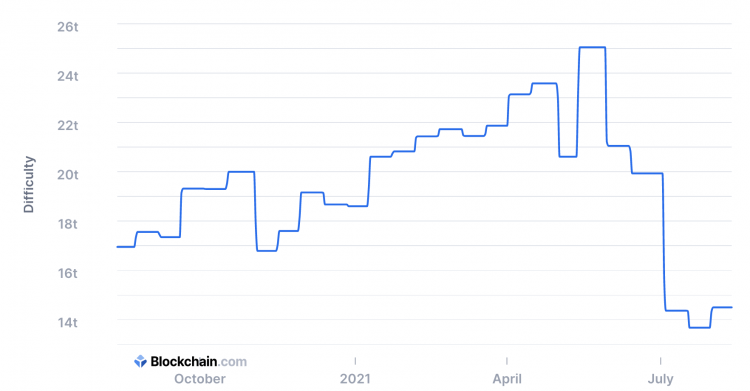 Bitcoin’s difficulty has increased for the second time since China kicked out miners in May with it set to increase again in about two weeks.

As it stands it is to rise slightly again in the next difficulty adjustment to 15.60, significantly down from 25 as of May 28th.

Since then, difficulty has only gone down as pictured above, but it now appears to have changed trend with it beginning to rise again.

The reason is probably mining expansion in Europe and America. News from that industry keeps detailing growth with Mara being the latest in stating:

Frankfurt based Northern Data announced they acquired all of Decentric’s GPU hardware that includes some 223,000 GPU cards produced by AMD and Nvidia for a total sum of €365 million.

Many of these miners hold the coins, with Mara for example announcing an increase in their bitcoin holdings to 5,784 BTC, worth some $270 million.

This mining boom therefore may well lead to miners holding more coins, with investments for expansion potentially funded through the stock market.

Something that could influence bitcoin’s price due to less supply on the market, with it now again rising to $46,400 at the time of writing as the China episode is seemingly clearing off.