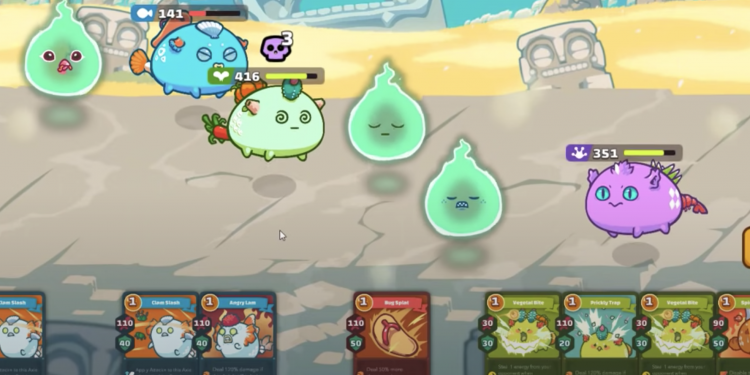 Cryptokitties like Axies on an ethereum sidechain fighting each other in a turn based card game with an in-game token (SLP) and a governance token (AXS) rewarding the players.

They’ve just crossed one million active users, claiming to be the first game to do so, and interestingly they’ve given rise to a ‘gaming as a job’ market which is a first we have seen.

We wanted to test-run this, but one axie is pretty expensive, and you need three of them to start, costing at least $1,000.

As you can see, an axie is going for nearly 0.1 eth sorted by the lowest price, something plenty might not be able to afford. For those that can however, there appears to be some sort of game farming development on-going.

A specific sub has arisen where ‘managers’ offer ‘scholarships.’ A manager being the axie owner, a scholar being someone with plenty of time usually in a poor country looking to make some dollars.

So if you have $10,000, you can buy three axie teams. With one of them you can play yourself, the other two you can ‘lend’ to grinders, earning 40% of the reward grinders get, keeping the rest for themselves.

The reward is usually in SLP, an in-game points reward, but also an actual token worth 20 cent currently. If you make it to the top 1,000 gamers in the leaderboard, you can also earn AXS, the governance token worth about $70.

This has ballooned recently with some fairly incredible stats by Axieworld showing 150,000 eth in total revenue, worth about half a billion dollars.

Almost all that revenue has been gained recently with it standing at a total of just 15,000 eth on the first of July.

One reason for this explosive growth may be that NFTs generally are currently booming, but another one might be that the ethereum sidechain called Ronin was launched recently.

Ronin is a Proof of Authority blockchain, thus the design is currently centralized, something that might explain how this ‘lending’ or ‘renting’ of the NFT axies is possible.

From what we’re told, the game’s interface allows you to share the axies with someone else, but that someone else can’t do things like breed the axies, only play them in the area tournament.

While the axie is playing therefore the gameing interface is managing permissions as the tokens themselves do not move from the owner, with the points then synchronized at the interface level.

Making it a bit interesting, though with plenty of tradeoffs as decentralization here is clearly not being taken as seriously as in bitcoin or eth with it possible for the blockchain to handle the token part while the sidechain handles other aspects that need less security.

In this way one can get both the convenience of playing the game as any other game, while also getting the token economics, or farming, or jobs, in a new business model of sorts.