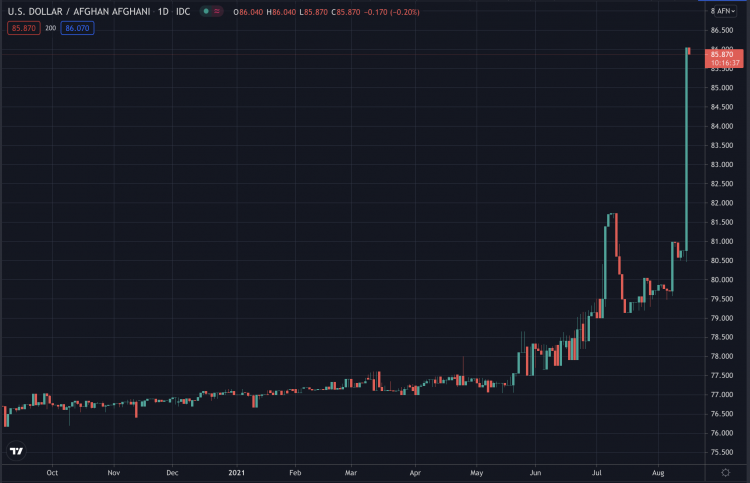 Afghanistan’s currency, called the Afghani (AFN) has dropped by some 10% today from 80.5 to 85.87 per dollar as pictured above.

The plunge follows the departure of Acting Governor Ajmal Ahmady who left on Sunday in a packed plane with other government leaders following the takeover of Kabul.

Ahmady said that on Friday “we received a call that given the deteriorating environment, we wouldn’t get any more dollar shipments.” The central bank “had to supply less currency to the markets on Saturday, which further increased panic.”

He suggested he was in fear for his life, publishing a message stating the Taliban had been looking for him. “Whatever their personal views, I also had many personal enemies. Or maybe they just wanted to greet me,” he said.

As it happens however the Taliban appears to have come with a message of peace. They have lifted the white flag, a flag that is flown for the first time by an Islamic people in decades.

They have announced an amnesty for all former and current government employees and even collaborators. Female presenters are back on TV. Somewhat astonishingly, Suhail Shaheen, spokesman for the Taliban’s Political Office of the Islamic Emirate of Afghanistan, told ABC before the Kabul takeover:

“Under a new Taliban government, freedom of speech, media and women’s rights, as well as the protection of minorities, would be upheld.”

If they announce that officially, it would be the greatest gift to the millennial generation globally as it would be an apt closure of an awful chapter.

Presuming a level of security is established as well, it would also effectively open the floodgates for investment as Afghanistan is some ten times poorer than Albania. Meaning there are tons of low hanging fruits in what could even be a race for investors.

Some of the diaspora could even return if they become a normal country with elections as in Pakistan and free speech, keeping sharia law in court for criminals as many predominantly muslim countries do.

“Our ultimate objective is a peaceful, united, democratic, stable and prosperous Afghanistan,” Pakistan’s Foreign Minister said after meeting with the Taliban.

Making this period a bit of suspended belief or disbelief as it would in some ways be comic, albeit a huge gift to the Afghani people, if the big bad tali impose a ruthless regime of free speech and free press and elections.

As it happens a senior Taliban leader Amir Khan Muttaqi, who used to be the education minister in the 90s, has been negotiating with Abdullah Abdullah who heads Afghanistan’s negotiating council.

That means Abdullah has clearly not run away. He was a senior member of the Northern Alliance back in the 90s and more recently in 2014 Afghanis voted him as president in the first round.

In the second round however Ashraf Ghani, who fled on Sunday, gained more votes but the results of that second round were contested due to signs of fraud with America then mediating talks that led to a a national unity government with Ghani as president.

If Abdullah is given a senior role in the new government, perhaps even the presidency as he appears to be the most senior elected politician still in the country, that would go a long way towards people starting to think that maybe this free speech thing is even real.

Currently, no one knows what to believe, but they have to sort out basic things and very quickly because the country of course can’t quite operate without a central bank governor.

There’s rumors there may be “good news” as soon as tomorrow with the world potentially waiting to be stunned if these guys that we’ve been told all sorts of things about, come out to say that the freedom of speech and of the press is guaranteed.

If they do, then perhaps it shouldn’t be too surprising, because they are influenced by Qatar and Qatar is to hold elections with it hosting Al Jazeera.

If they do, it would also probably increase pressure on Israel to reach a settlement with Palestine because these guys have clearly changed and the first election in the Arab world is a peaceful and silent revolution.

So after two decades of war, the millennials wait to see not just what is the fate of Afghanistan, but also what relations may now look between the west and the muslim world after the white flag is finally raised.

And who knows, if all these nice things are given then soon enough we may even hear about blockchaining and bitcoining Afghanistan with the narration here quite simple: Remember that time the central bank governor fled and left us all without money? Yeah, bitcoin don’t need govno.