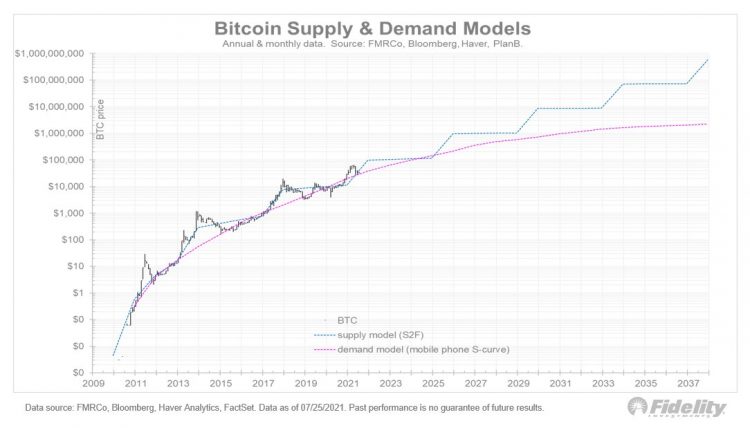 Jurrien Timmer, Director of Global Macro at Fidelity, presented earlier this month a method of valuing bitcoin that predicts it reaching $1 billion per coin in about two decades by circa 2038.

Timmer combined in one chart the stock to flow model together with his own demand model as shown above. For his demand model, he says:

“Metcalfe’s Law holds that, as the number of its users grows linearly, a network’s value (or, by inference, the bitcoin price) grows geometrically.

In other words, bitcoin’s utility (value) should grow much faster than does its network of buyers, sellers, exchanges, ATMs, and participating retailers—at this time including, directly or indirectly, AT&T, Wikimedia Foundation (donations), the Dallas Mavericks, a few insurers, many banks, and countless small businesses.”

His own demand model grows very slowly to about $1 million by 2030, while the stock to flow supply model increases faster with each halvening that in combination models a price of $1 million to $10 million by 2030.

Interestingly the demand model appears to be the floor or the bottom of the price historically, while stock to flow seems to fit better with the peak, but the gap between the two grows considerably after 2030.

The reason why this significant gap develops, which is not found prior to the 30s, is not clear but it may be simply due to not taking into account the changes in the value of the dollar itself.

Timmer for example claims that $1 invested in stocks in the 1700s is now worth almost $4 billion as the value of the dollar changes relative to other assets.

In 20 years thus it may be that $1 billion is what $1 million is considered currently. That was the case 20 years ago when Mark Zuckerberg is famously told one million is not cool, you know what’s cool? One billion.

One million back then was a lot of money as a house would still cost $20,000 to $50,000 while one billion was close to what today we see as one trillion, a very huge sum.

Nowadays however more and more companies are passing that $1 trillion market cap valuation. So in 20 years time it is easy to see the sum of a trillion becoming quite a bit common to the point individuals are worth a trillion or more, with the big number so being quadrillion.

In such a world where say Apple is worth one quadrillion, then it might be easier to see why bitcoin can be worth ten quadrillion.

However looking at it from the present is a bit like a fish out of water because we’re not very good at dealing with the accounting of the changes in the value of a dollar as a quadrillion is in some ways a number we don’t quite grasp because currently nothing is worth that much.

Therefore this prediction is dismissed out of hand, but Fidelity is not quite alone with Deutsche Bank predicting cryptos will dominate by 2030 in it’s Konzept prediction report for 2030 where they say:

“The forces that have held the current fiat system together now look fragile and they could unravel in the 2020s. If so, that will start to lead to a backlash against fiat money and demand for alternative currencies, such as gold or crypto could soar.”

In addition past halvenings have shown there’s a real relationship between supply and price with that relationship being one of magnitudes where price increases by 10x after supply is halved, rather than by just 50%.

In both bitcoin price and fiat value, the changes appear to be so gradual that in many ways they are unnoticeable rather than there being an insta jump or fall.

You can see the value of the fiat above for example fall so gradually that the difference between $1 and $0.02 looks small, except it amounts to a 98% fall in value without recovery.

On the other hand that a $1 in stocks would be worth $4 billion is in many ways a statement that instantly finds dismissal with the reflexive reaction being to refuse to believe it.

Which is perhaps partially why this constant devaluation of money is generally accepted as our brains simply can’t compute it with the data itself treated as historical or factual curiosities, but as it happens those facts and data are telling a clear story that may well translate to $1 billion per coin.

Something that will probably happen considering the trajectory of fiat money, but just what $1 billion will be at that point, perhaps remains to be seen as assets respond a lot quicker to relative changes in supply and thus relative value.