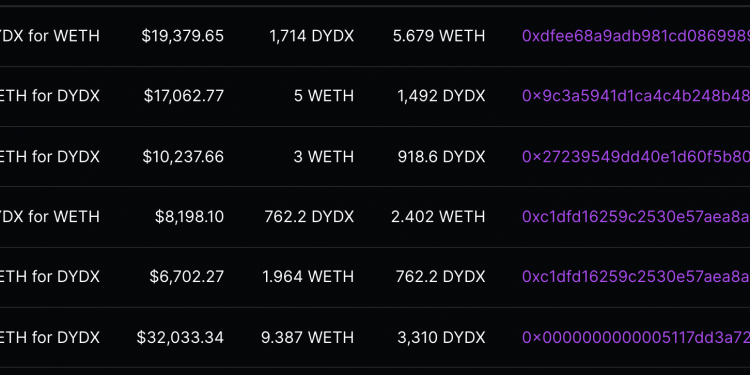 dYdX, the Deribit on smart contracts, has began trading at Sushiswap, Uniswap, and centralized exchanges like OKEx hours after the claim process began for the governance token airdrop on platform users.

One dYdX token is currently going for $11 depending on the exchange, with its initial supply lower than the allocated 55 million because some potentially eligible claimants did not meet trading requirements to unlock the airdrop, or were from USA.

The European coders behind the platform have barred Americans and require a pledge from all claimants to not sell or transfer the token to US residents in light of a stifling regulatory regime in the former land of the free.

The rest can stake the token to participate in governance where they are subject to potential slashing if anything goes wrong, otherwise can enjoy 25 million token rewards by the block distributed over five years.

They can also participate in wider code based governance, dealing with matters like how much of the profits from fees for trading on the dYdX platform should go to token holders, and how much to depositing liquidity providers, as well as other decision making issues that may arise.

The distribution is by the epoch with network fees currently quite high to claim, some say as much as $700 while the figure of $300-$500 has more widely been stated.

That’s presumably because of an initial rush to claim, with the ethereum network of course running by the 12 second blocks that can only fit so much.

In the first epoch therefore, which has just become claimable, total circulating distribution may be perhaps 30 million tokens for a platform that makes as much as $5 million in weekly revenue, or more often about $4 million a month, and nearly half a billion in trading volumes for the day.

Another epoch has began that is to distribute 4 million tokens, with 250 million to be distributed over the next five years as reward for trading fees.

The platform itself offers perpetual swaps for a range of crypto assets, as well as spot and margins crypto trading, all running on smart contracts.

It is decentralized at its foundations and fully open source, with the governance token smart contracts forked from Aave.

They have been fully audited thus, but in this frontier the only real audit is by the Nakamotos around the globe with a far more benign version of a bug found in this case as the front interface was showing zero for stkdYdX tokens despite dYdX being deposited, with that error now being fixed.

“No user funds are at risk, and all funds are recoverable,” a dYdX dev said with an upgrade of the staking contract to be launched.

That risk taking, by the brave pioneers carving this new world, is in great part not only what distinguishes this space from others but also what pushes forward innovation while much around is beginning to feel a bit sclerotic.

Like the explorers before us, and like the space age pioneers that will follow, this generation is blessed with the opportunity to re-balance the distribution of power and ownership from our very nice comfortable bedrooms.

For what is happening here is nothing less than the delivery of that eternal promise: the people shall be free. Or in this case, we shall own our own code platforms.

At least us europeans. The former land of the free has to fight for it first, and as France came to the aid of revolutionary USA, we too will of course as the pioneers move forth in dance and trepidation to conquer more of the frontiers of man.