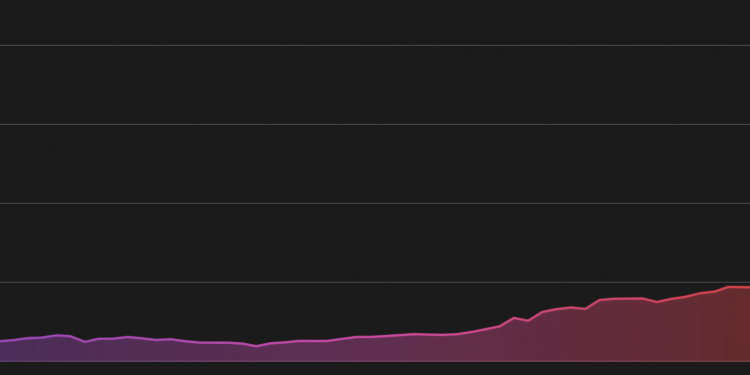 You wake up one morning and suddenly there’s $1 billion worth of assets locked in your project farming some meme token that offers some 6,000% APY.

Just another day in the land of defi with Nyan grabbing everyone’s attention because it sent total value locked in the newly launched ethereum second layer, Arbitrum, spiking to low orbit as pictured above.

So what is going on? Well first of all the testrun and then a brief interview with someone from the project.

Depositing on the Arbitrum second layer is both easy and cheap. You just go to the bridge, type in whatever amount you want to send, and then confirm on Metamask with the fee paid seemingly being the same as for a simple transaction.

Now we’re going to Sushiswap which has already moved to Arbitrum. We want some nyan (worth about $2.50), and a link we’re given shows this token as non existent when we’re on the ethereum mainnet. When we switch to Arb however, the magic appears.

There’s a lot going on here. First of all, our MetaMask at the very top says Arb1. The bridge very nicely automatically filled on Metamask all the details for the new network by just clicking. So we had to just click-switch from mainnet to the now auto-setup arb.

On Sushi it tells us we are on Arbitrum and we can now see the happy cat as well as our nine nyans. We are now going to send it to the farm and we’re going to do it through arbis.finance which is just an interface for auto-compounding yield from the actual Arbinyan farm.

Simple stuff, once you know how to do it. We’re now going to sit and watch our nyan grow a bit after we deposited them as above with the fee here $5 on the second layer.

Arbi will give us an airdrop however, with the snapshot expected in a few hours, so hopefully they’ll cover the cost of this testrun.

The Dawn of Broadband

Arbitrum as you might know is an optimistic rollup that has some game theory through fraud proofs with it best thought as a blockchain on top of eth with its own etherscan like explorer.

It’s one among a few such second layers launched recently, with it gradually growing in rankings, but before today it had only about $200 million locked in value.

Suddenly that went ballistic with some $1.5 billion locked in Arbitrum now, $1.1 billion of it being in Nyan. So what is this thing?

What follows is a transcript with Canti, the discord mod of the project, who found the time to answer some of our questions.

Can you give a brief description of what Nyans are, why did this suddenly grab $1.1 billion in locked value?

Canti: Nyan is a meme token that was created by an anon dev for the purpose of driving liquidity and users to Arbitrum.

As for the monstrous Total Value Locked (TVL)? I have no idea how that happened. I informed a few friends about it when the TVL was very low, made a small Twitter based on my discussions with dev, word of mouth took over and people began to bridge to farm it.

At some point I have to imagine funds like 3AC or Alameda were capturing yield but I haven’t seen any direct evidence. Dev told me he expected $5M to $10M TVL at most, but then meme magic kicked in.

Right so there isn’t a plan for this project?

No, there is. He wants to launch a rollup-optimized Uniswap V2 fork at minimum, though others are working with him on a lending platform and an NFT marketplace is considering letting Nyan holders farm some of its token supply.

Not some grand plan or anything but there’s that. Overall the guy wanted to get people using Arbitrum. One week into deployment nothing was happening while Solana was ripping new highs and ripping at Ethereum’s narrative.

Rollups are the primary scaling solution for Ethereum, so aside from ‘cool things to use,’ the plan from the beginning was to get people excited about Arbitrum and swing some of the narrative back toward Ethereum’s scalable future.

Are you guys related to Arbitrum devs?

Not in any way! Though I can see why one might think so.

I did a test transaction and had to pay a fee of $7. On dYdX, once you in the zk L2, you pay nothing. So why did you choose Arbitrum?

To be clear, I am just an early participant who happened to strike conversation with the dev. I’m not a part of Nyan in any “official” capacity.

dYdX is not a generalized EVM rollup and can only be used for that exchange. You’re right—zk rollups are very good. They’re just not ready for generalized EVM yet and Arbitrum got their launch off before Optimism lifted their whitelist. The reality is, when a proper zkEVM rollup goes live both Optimism and Arbitrum will be swiftly obsoleted.

In regards to the fees, were they lower and this is peak or is $7 the norm?

Was definitely cheaper at first. In Arbitrum’s mainnet announcement article they mention they’ve set a fixed fee and that too much activity will ramp up the fees to keep the chain stable. I think I’m wording that correctly. Effectively throttling too much traffic on a nascent network.

Tonight it was clear the Remote Procedure Calls (RPCs) were taking a beating. Around the time the RPCs ran into issues people began to notice higher fees and, in some cases, had to manually adjust gas limits on transactions. I suspect this was the mechanism they were referring to.

What can you tell us about the dev. Is he related to the original Sushi dev first of all?

There’s no relation between Nyandev and Chef Nomi. I suspect Nyandev is not likely to ever doxx themselves.

Asked about Sushi because why does this dev want to fork Uniswap?

As far as I can tell he has nothing against Uniswap. He’s got some gas optimizations that can greatly reduce the cost of swaps and liquidity pool creations, so making a DEX of his own gives him a chance to provide an improvement to an already useful dapp as well as an opportunity to further incentivize liquidity, which sort of falls under that “give people on rollups nice tools to use and nice token incentives to earn so they stay on Ethereum.”

Finally in regards to this arbis.finance, I saw the project retweeted them, so do you think they trustworthy?

arbis.finance is a fork of YakYield, a yield aggregator on the Avalanche chain. It was launched by 0xPuffin on Twitter, someone I know to be a kind person and a hard working builder in the space.

I believe the team to be trustworthy and I’m looking forward to seeing how they differentiate from the original protocol. I can be seen on Twitter nearly begging someone for a lending protocol that supports Sushi LP tokens as collateral; this is because I want Puff to have more tools to build out cool things with!

Well, there isn’t much more to say except it’s starting to get a bit interesting with all these Chef Nomis and now Nyandev and 0xPuffin. It’s probably what we’ll see a lot more of if Gensler wants to play.

That’s in part, we suspect without much basis, why they might be forking Uniswap. To show it maybe was once Hayden’s baby, but it isn’t anymore, and though SEC or anyone else can tell Hayden what to do, they can’t quite tell Uniswap – the open source code rather than the platform named so – what to do.

Not least because what might now seem as sudden, is a product of years of development, hard development in a way that ensures decentralization.

So we’re all soon going to get a new Uniswap, running on a second layer, from an anon dev, as Nakamoto seemingly greets the broadband era with competition starting to become a bit intense.

On a final note, all this is brand new on top of brand new, so bugs are to be expected although we all hope there won’t be any. We’re starting to get used to these $1 billion smart contracts now however, but always remember the final audit is by Nakamotos around the world so at the very least chop your assets into different places like you’d chop your private keys.