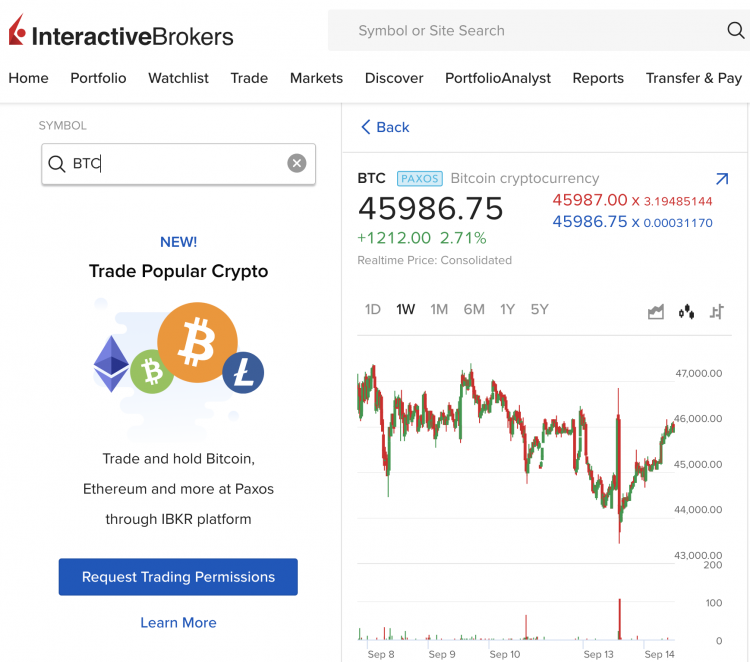 Interactive Brokers (IBKR), one of the biggest and oldest stock trading terminal, has launched spot bitcoin trading in addition to eth, litecoin and bitcoin cash.

The service is currently limited to US customers and is offered through the Paxos Trust Company with it charging a fee of just 0.12% – 0.18% of trade value, depending on monthly volume.

The company says there are no added spreads, markups, or custody fees, making this similar to trading on Coinbase.

There doesn’t appear to be an option to withdraw the crypto, however, but they say actual custody is through Paxos with this being spot trading of actual bitcoins, rather than a derivative.

“As financial markets evolve, sophisticated individual and institutional investors are increasingly seeking out allocations to digital currencies as a means of achieving their financial objectives,” said Milan Galik, Chief Executive Officer at Interactive Brokers, before adding:

“In giving our clients access to cryptocurrency trading, we recognize the need to meet the growing investor demand to trade cryptocurrency alongside other asset classes in a convenient and low-cost way.”

Although previously you could buy bitcoin through European ETNs or Canadian ETFs, the option to now buy it directly for US customers through a stocks account can make it cheaper and with less counterparty risks.

The broker itself has some 1.5 million customer with an average of $250,000 in assets, making it some $375 billion that can now more easily access bitcoin.

That’s some three times higher than Robinhood which has 22.5 million customers, but each manages just $5,000 on average, giving a total of some $112 billion.

So making this one of the biggest established and well known broker to open access to cryptos as bitcoin’s adoption continues to increase.