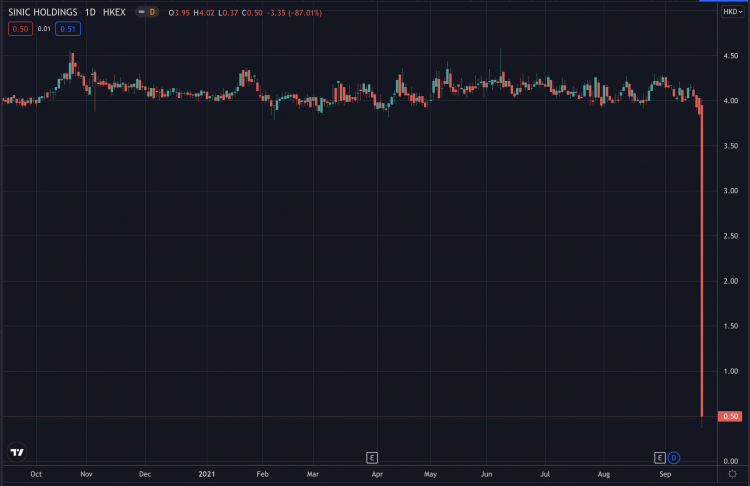 The reason is most likely macro. Jitters in China and Hong Kong have sent a property developer, Sinic Holdings, down some 87% (pictured) in a first notable crash of its sort since 2008.

This is a medium sized property developer with a recently reported 8-months revenue of $12 billion. Its stock has halted trading, with the wipeout over in about four hours, in part presumably because it has a debt to equity ratio of 291.19.

That may suggest Evergrande is old news. The property sector as a whole in China and Hong Kong may now be the news with the Hang Seng Property Index down some 6.7%.

Raw materials are down too. The Hang Seng index has them at -6%, with oil falling 1% as presumably lower demand is expected.

The property troubles are spreading to insurance. Ping An is down 5.8%. Chinese media reports it as saying, according to a rough translation:

“For real estate companies such as Evergrande, Blu-ray, and Oceanwide, which have received much market attention, Ping An Insurance’s capital is “zero exposure” regardless of whether it is equity or debt.

At the same time, Ping An has invested in real estate companies including Country Garden, China Jinmao, and Xuhui. All the invested companies have not stepped on the red or orange files of the “three red lines”, and their financial level is relatively good.”

What is translated here as blu-ray is the Shanghai-listed Sichuan Languang Development, one of the largest real estate companies in western China. Shenzhen listed Oceanwide Holdings has also been in trouble, it has about $1.5 billion in revenue.

Evergrande thus may be the tip of the iceberg, with the sell-off also extending to banking as the China Merchants Bank plunged more than 9%. They have $1 trillion in assets.

In the west and pretty much across the world, stocks and futures are down by about 1% to 2%, except in South Korea where there’s a 0.4% green, in part perhaps because people are selling off Chinese listed stocks in other countries.

The dollar is up about 0.16% and gold is up as well about 0.17% as Asia investors presumably run to cash and hard money, so why is bitcoin down?

With the sell-off now extending to some banks, it’s not clear this can be kept under control anymore as it appears the whole property market in China is in trouble which is presumably very difficult to bail out fully.

The property price index there has fallen to 2016 levels, wiping out five years of gains. That means some mortgages given out during that period may be in red. Defaults thus may increase. Any and every default is a loss for the bank because when it ‘prints’ money to lend, that printed money has to be paid back, if not by the borrower then the bank.

That spiral eventually ends with the bank going under, a situation that technically can mean the loss of all deposits in the bank, but practically nowadays means haircuts for depositors of more than $100,000 or so, with the money printer then turned on.

And here is China’s big problem. It doesn’t actually have a money printer. It obviously doesn’t have the dollar’s global reserve status that can export inflation, or the dollar’s oil standard that backs it, and it doesn’t even have the euro’s global share of some 30% in trade.

Instead what it has is an artificial peg to the dollar, and pegs usually don’t hold. Making their monetary situation pretty fragile.

If the peg falls, which you’d think it will if a proper crisis develops, then it’s not quite clear what should happen. Intuitively you’d think CNY should strengthen because China is a big exporter and thus a lot of foreign currencies are exchanged for CNY. If it does strengthen it may even reach dollar parity, something that should be a big problem because their goods become expensive and thus their exports plunge and the economy gets into an even bigger or a more structural and permanent crisis.

In theory, such CNY strengthening can give them the printer as they flood the market to keep CNY’s peg or a far too devalued value against the dollar, but the Politburo probably can’t act quicker than the market and a flooding of CNY would come with the risk of the market then selling CNY which may mean the peg would still go off, but in the opposite direction.

We thus logically have a situation where the banks can’t be fully trusted with anyone that has over $100,000, and CNY can’t be trusted because the Politburo would flood the market as a plunge in exports due to structural financial changes may be devastating to the economy.

A situation that in many ways is perfect for bitcoin, but it is down not up. The reason is probably because financial houses in London, New York, Shanghai, Amsterdam and to some extent Paris as well as Frankfurt, as far as we suspect, have incorporated bitcoin in their overall trading strategies probably in them quants and hedge fund outlets.

We began noticing this in mid to late 2020 in the specified financial centers, as previously bitcoin would have jumped when retail investors were fully in charge.

These quant kids however have integrated bitcoin more with the stock markets, in part maybe because there are now quite a few ETFs and ETNs, which tend to benefit from the printer but also respond to stuff like this.

Yet we think this effect is temporary because supply and demand should kick in once the kneejerk ‘artificial’ play is absorbed, and demand you’d think should rise at least in Asia because there isn’t another convenient unit of account outside of banking and fiat.

But what will actually happen is obviously for time to tell. Once the initial re-shuffling is absorbed however, you’d think all those trillions that would have gone to China go to Europe and America, while the Chinese themselves go to bitcoin, but just how this potential echo of 2008 will play out remains to be seen.