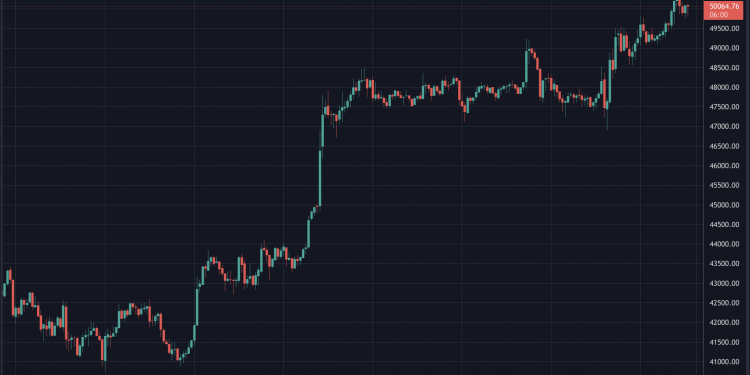 Bitcoin has risen above $50,000 for the first time in a month while stocks have had a somewhat red two weeks.

Bitcoin now is verging on gaining over last month, with the big question of course being whether this is leading the way for stocks or whether bitcoin has become a bit of a safe haven asset, at least temporarily.

From observation for much of this year it has looked like bitcoin is following stocks, but that’s potentially deceptive as bitcoin briefly reacting to stock movements is perhaps just a blip in how it actually acts.

So more fundamentally some traders suggest bitcoin reacts quicker in proper trend setting, with stocks following, because it is a more volatile asset, its holdings are far more global, and it is a lot more distributed to the public in regards to standings than stocks. In short, because information travels faster in bitcoin.

There’s some evidence for that. In particular 2018 was a rubbish year for bitcoin, a lost year for stocks, and almost all assets. 2019 was decent for stocks, but not for bitcoin however. So any correlation is fickle.

But it is boom times, a mighty boom in fact, so we are tempted by the suggestion bitcoin is leading although it is probably more likely it’s a bit of both.

There’s supply chain shortages and thus less goods may be produced. Supply and demand should cancel that temporarily where profits are concerned, and in the medium or even short term – with short here being months – you’d expect this to mean higher profits because the supply chain issues are temporarily due to the freezing of movement and production in 2020.

Gas is going up, oil. Again a great indication the economy is starting to boom with the only negative here for stocks being speculative money is potentially going to gas or oil – way late in that perhaps – but even if so, that speculative money will return.

China. The petty rezhime may shove foreign investors in Evergrande, leading to some potential losses, with neo-communism there potentially leading to lower profits as well as significant mismanagement due to the politburo being more prone to failure than free market forces.

Hence apparently there’s some power outages there, with this being potentially one actual explanation for the stocks and bitcoin behavior.

Stocks are apparently negatively affected because a lot of listed companies serve the Chinese market and so may get less profits, but on the other hand investment that doesn’t go to China should go to US or Europe, leading to more growth and so more profit.

In between there would be some re-adjustment, so the action we have seen in stocks is perhaps the pricing in of that re-adjustment.

Bitcoin keeps going up during China time in particular. We’ve all heard rerere from there on corn, but we think all this PBOC stuff is hot air on the ground when it comes to practical effects, with Shanghai in particular very much bitcoining.

Presumably they’re using it as a hedge and they’re increasing their holdings for that purpose, quite logically because Evergrande might be just a canary that even now spurred PBOC to print $100 billion in a week.

In a time of debt problems, you bitcoin of course because it is outside the banking system in a way that no other asset really is, including gold which is mostly held by central banks which can sell or ‘devalue’ gold at the same time as mass money printing.

Turkey is a far smaller story as TRY nears 9 to the dollar. Yet adoption there is increasing and it adds to an overall potential explanation that bitcoin is responding to monetary changes while stocks are or have been pricing in potential lower profits primarily due to a potential slowdown in China.

And it is bitcoin leading. Cryptos obviously have their own factors. Ethereum for example has plenty of reasons to boom, but right now bitcoin is charging like a lion full of strength.

That all can change, but the change right now may be that bitcoin is leading the way perhaps even for stocks as all that printing and all those monetary factors that go into bitcoin should maybe go into stocks too, albeit more slowly.

Finally, there’s a lot of cash sitting on the sideline with reverse repos crossing $1.6 trillion, cash that maybe came out of stocks or even bitcoin which dropped by more than 20% last month.

That money is kind of being burned with rising inflation, so it will probably quickly move if bitcoin is indeed showing there’s a change in ‘short-term’ trend.