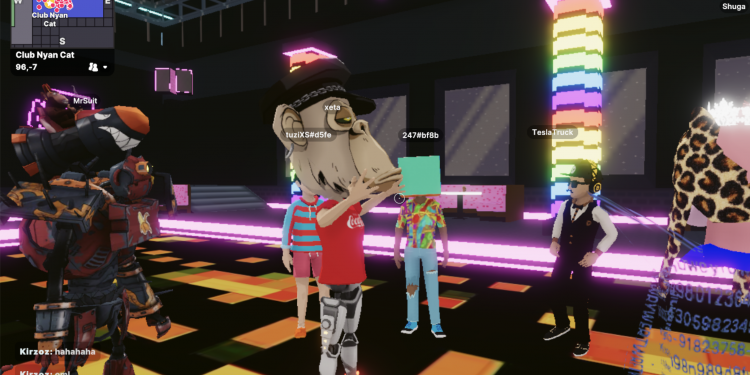 The soft opening of Club Nyan Cat gave some a glimpse of what global partying in the 21st century may look like.

Just as what looks like an ordinary and boring cafe sometimes hides cool music and partying below or above, so too here you’re presented with an ordinary scenery of an art gallery displaying nyan cats, many going for more than 10 eth.

There were people wondering around, but now and then someone says on the chat press the rocket, a rocket that looks inannimated.

The rocket takes you down below, or up above, to the club where you instantly hear some pretty cool music.

A red carpet greats you as you pass some fashionable avatars on the way to the dance floor where the party is in full swing.

Now it’s empty. Last evening we forgot to take a screenshot except for the featured image, with the entrance here being full of people and activity.

So much so that the servers were not quite able to smoothly handle it because it’s the people that run the servers, like people run bitcoin nodes.

They get some mana for it, but perhaps a bit more incentive is needed to have full on server resources so that the experience is smoother.

Yet such resources are not there at over capacity probably because this thing is still very new. Also maybe because we want to enjoy all this ourselves first before all the normies come trash it.

What stands out first and foremost is the music. It’s cool and makes you want to dance. Then the visuals of the club itself with the lights, and the knowledge every other avatar is an actual human, makes the whole atmosphere very social.

There’s a global chat, although just for the people in the nyan club, and so what began – as it usually does – with a wow this is cool and an avatar stiffness, gradually developed into making friends and even forming social groups or cliques.

They gathered in a circle, and there they danced, with someone going in the middle making moves and showing off tricks, as pictured above.

It’s the first time we experienced such a thing, and the experience is memorable. We got a Nyan Cat NFT to capture that memory, with 2,000 of them given out in what someone called a hard soft opening.

The NFT looks cool as well. We wanted to test the OpenSea minting, so we put it up there, but we’re told it is a ‘fake NFT’ because the real one is part of a collection. Ours says Untitled Collection #84337.

The real one as it happens is on the xDai sidechain and costs about $100 currently to transport to mainnet, but the experience of minting an NFT on Opeansea was surprisingly smooth and actually free. Listing it costs about $100 however.

Yet that all was an extra of sorts to a new development. A development that is complementary because physical partying or clubbing has proximity.

However the costs to metaverse partying are pretty much non existent, with a red carpet digital experience being a fairly close approximation of what most can’t quite have in real life.

And the being in there is a reflection. You have guys and/or girls at the front, some presumably too drunk. Some standing by the bar, some on the edges, some above, some dancing, some talking, some moving around to places.

Unlike in real life where your face might reveal you, here you can be just another avatar, unless you strike a conversation and want to reveal yourself.

Most crucially, the events are far more accessible regardless of standing because no one knows your standing. That may change as human nature is transported and cliques or hierarchy with it, but the lower costs should increase overall standings, at least on a meritocratic basis.

So this development, at its very dawn, should go a lot towards increasing what we’ll abstractly call love chemistry throughout the globe as a something that partially defines us, socializing, becomes more based on meritocracy than standing.

A revolution thus is afoot, and this time we are dancing.