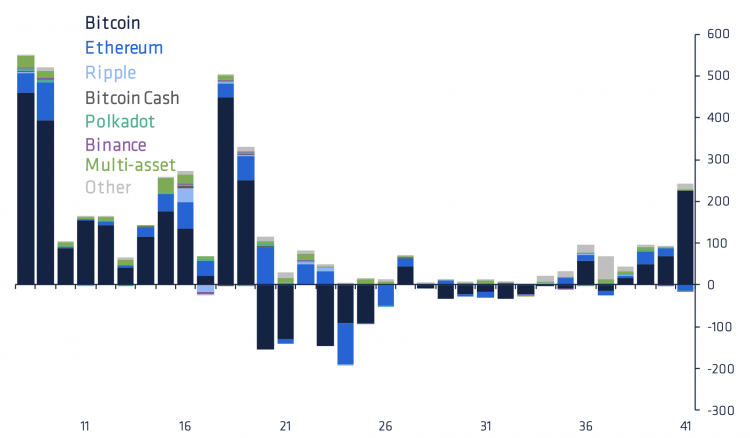 Institutional interest in bitcoin has risen to a five months high with $225 million invested through stock traded bitcoin products as pictured above.

That makes it the 8th week in a row of positive inflows during which $638 million has been invested according to the latest report by CoinShares.

ETC Group saw the most inflows with $165 million invested.

Their product, BTCE, is traded on Germany’s Xetra and stands out in allowing the actual redemption of shares into bitcoin with each unit of BTCE giving the holder a claim on a predefined amount of Bitcoin.

Their total assets under management therefore have risen to $1.4 billion, with $400 million of it added this year.

Grayscale in contrast has seen no inflows in part because their shares were trading at a discount over net asset value.

Coinshare speculates the rise in inflows is due to a potential bitcoin ETF approval by the US Securities and Exchanges Commission.

Bitcoin however began rising way before any such suggestion, but almost all this weekly inflow, $225 million out of $226 million, has gone to bitcoin.

Other cryptos have barely seen any interest, while ethereum has seen outflows of $14 million.

The bitcoin season therefore may be taking over from the altcoin season, with a considerable $66.7 billion now in assets under management across all mentioned stock traded crypto products.

That’s still just 3% of the entire crypto market cap of $2.3 trillion, raising the question of just how much influence a bitcoin ETF based on paper futures may have.

It would be the first in the United States where they have been denied the option since 2013, when bitcoin was trading at $200, in what should go down as the worst investors’ ‘protection’ decision in the history of protectioning.

A decision that may have kept out pension funds which soon might be able to get some coins in a stock form.