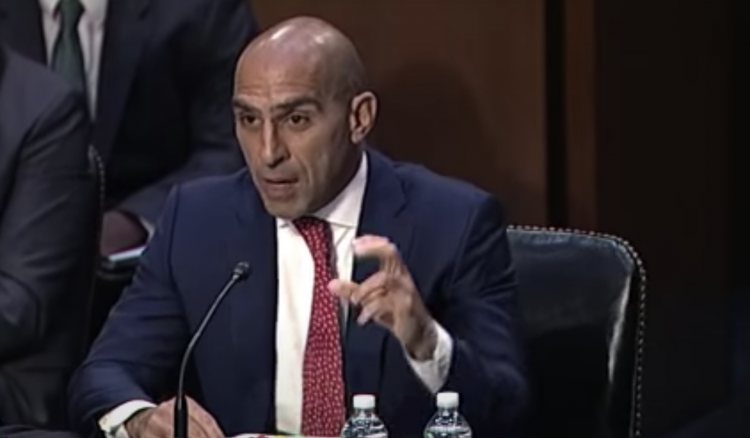 The acting Chairman of the Commodities Futures Trading Commission (CFTC) Rostin Behnam (pictured above) has told a Senate committee that 60% of currently traded cryptos are commodities.

“As of yesterday, the total size of the digital asset market was $2.7 trillion. And among that $2.7 trillion, nearly 60% were commodities,” Benham said.

Bitcoin and ethereum have been classified as commodities and they alone in combination get to nearly 60%, but in an action against Tether, CFTC seemed to classify stablecoins as a commodity.

In addition something like Dogecoin is clearly a commodity, or litecoin, or ETC, BCH, Monero and a number of second layer tokens would also probably be closer to a commodity with game tokens potentially the same.

So far however CFTC has allowed the Securities and Exchanges Commission (SEC) to dictate with CFTC itself not taking any initiative where classification is concerned as the two settled commodities, bitcoin and eth, became so by default after SEC said they were not securities.

The recent settlement with Tether however may indicate this is changing and in a move that perhaps suggest Benham is up for a fight, he asked the Senate to give him the power to be the ‘primary cop’ where cryptos are concerned.

He said cryptos are not the usual remit of CFTC, but considering their size and their fast growth, he was ready to stand up as a “responsible” regulator.

In contrast SEC chair Gary Gensler has been accused of abusing his position with former SEC employees stunned at their behavior in threatening lawsuits when projects asked for clarification.

While Benham would most likely court more trust from this space, especially after a powerful speech he gave at the United Nations as a commissioner in 2018 when he called blockchain technology “a modern miracle.”

Coinbase and other Silicon Valley backers however have called for a crypto specific regulator, but even if it found congressional support, such regulator would probably take at least a couple of years to be established.

In the meantime, this space needs clarity and entrepreneurs need to be out there building things rather than in court fiddling with Gensler.

Under Benham, who is currently going through Senate approval for his nomination, CFTC might be more proactive in explicitly stating what is under its jurisdiction, rather than risking an irresponsible over-reach by SEC.

Of urgency for many Americans currently, who are losing billions by being firewalled from innovative projects that want a governance token for public control over a blockchain platform, is clarification on whether things like dYdX fall within CFTC’s jurisdiction.

Such platforms will not accept SEC jurisdiction to the point where many will be forked by anon devs or will be launched by anon devs or devs in other jurisdictions, because it is impossible to comply with SEC requirements while aiming to be or become a platform that no one controls so as to, if not eradicate then minimize any fiduciary relations or trust requirements as we have in scandal ridden intermediaries that gave us Libor.

They probably will however accept CFTC jurisdiction because unlike SEC which is based on guilty until proven innocent, CFTC operates on the principle of innocent until proven guilty.

CFTC does however have power to act where there is fraud or scams, and if we had our way we’d give them even criminal prosecution powers in such cases to address a bit the potential asymmetry in such investigations requiring additional resources.

Even as it stand however such enforcement would be a sufficient deterrent without unnecessarily preventing innovation or experiments in new business models that improve upon the easily abusable paper system, which SEC, even with their mountains of paper, have still not prevented as the banking collapse proves.

This space however, and competition in general, may go a long way towards preventing such abuses by building systems where don’t be evil becomes can’t be evil.

Hence CFTC might be given more resources as the Agriculture Committee would be happy to see them do a better job. SEC on the other hand might only get lip service because the Banking Committee does not want them to actually do their job. Just imagine what the summer report on GME would say if they did actually do their job with all that naked short selling and so much dirt that makes Libor look like child’s play.

This space therefore may get someone that might eventually be called a crypto warrior depending on whether we are right on where this is going.

Unlike some corporate media that has twisted Benham’s testimony into FUD as some say, we think he is precisely what crypto needs right now as Benham does have an opening to take the lead and maybe even ‘save’ America which is more and more being firewalled with many American investors becoming very angry, something that no one quite knows where it may lead indirectly.

Hence his nomination may allow him to put into practice his decent understanding elucidated at the United Nations where he said:

“The single greatest weapon against corruption may be the cell phone. There are 6.8 billion cell phones in the world, almost one for every person on the planet. Technology could simply bypass corruption. Here is our chance to put money directly into the hands of those who need it, without bribery, rake-offs, graft, and shakedowns. Virtual currencies could transform the economic and social landscape. It could mean a massive, and equitable, shift of wealth. Technology could be transformational, without a military take-over, civil war, or political or religious creed.

However, economic elites know all this. They will not be idle. This is what I mean by a powerful danger. If the kleptocracy controls technology and the means of distribution, then they simply accumulate more wealth at the expense of their citizens, draining wealth in cryptocurrencies rather than dollars or euros. Virtual assets may be a stranglehold. In other words, technology can be a weapon against the work of the United Nations and others trying to alleviate poverty or violence. Virtual assets become a means of deeper control of wealth and a means of exploitation…

Blockchain is more than technology: it is an advance that reaches out into every aspect of life. We could use Blockchain to address the most basic, the most primal problems on our planet: corruption, income distribution, poverty, food, and health care. And, the fear billions of people experience everyday as they try to survive.

As a young child, I would come to this building in search of solutions to the problems of the world. Now, today, we may have found one of those solutions – bigger, bolder, more comprehensive, and more effective than anything imagined before.”