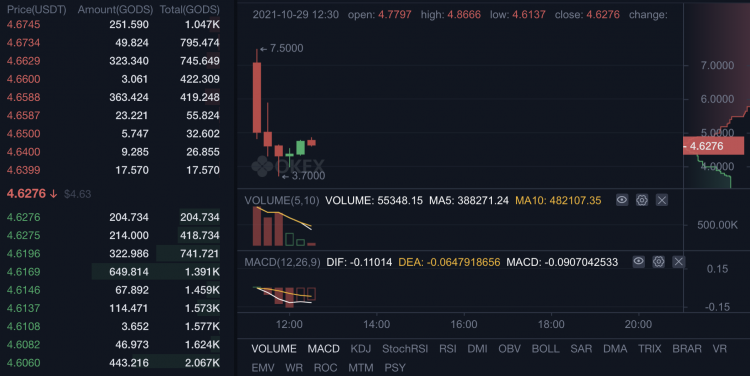 The first ever public listing of Gods Unchained’s token, $GODS, will go live on OKEx.

SYDNEY, Australia — 29th October, 2021. The first ever listing of Gods Unchained’s token, $GODS, will be listed on OKEx. The token listing will provide accessibility for the wider crypto community to be part of the growing Gods Unchained ecosystem.

$GODS is the native ERC-20 token of the Gods Unchained universe. Mortals can use $GODS to craft NFTs, purchase packs from the Gods Unchained marketplace and earn even more rewards by holding the tokens in Immutable X. $GODS tokens also represent voting power, enabling players to participate in governance proposals that influence the game’s destiny.

The listing will start on the 29th October, 2021 at approximately 8:00pm AEDT. At the time of listing, visit
https://www.okex.com/markets/prices/gamefi-cryptocurrency.

About Gods Unchained
Led by the former game director of Magic The Gathering: Arena, Gods Unchained is a free-to-play trading card game built on Ethereum. Designed for both casual and competitive play, players must strategically outsmart their opponents, earn cards and build decks to combat a wide variety of tactics. Unlike other games, players completely own their digital assets, giving them the freedom to trade, sell and use their cards any way they like – just like owning a real, tangible card.

About Immutable
Immutable is an Australian-based company and market leader in blockchain gaming. The company is bringing transparency to the opaque world of in-game economies and providing gamers with true digital ownership property rights. They are showcasing these advancements through Immutable X, the ultimate layer 2 scaling solution for the Ethereum network.