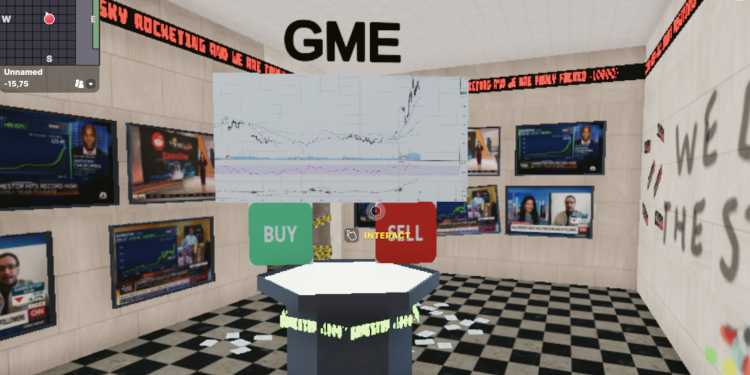 You mix an ape with a spartan and apparently you get Loopring, a forgotten 2018 project that keeps dangling bananas in a curious chase which has been going on for months.

Since May when GME itself put up an NFT page that basically said nothing except it showed a 1337 eth address. So cool, but for leets.

We’ve been going through that address to try and make sense, but there isn’t much there except some withdrawals from Coinbase of $160 worth of Loopring (LRC), and they bought some Cryptokitties back in June.

They have a template ERC721 (or NFT) smart contract, and a token called GME that currently has only one issued.

This address is also on Loopring. You can’t link to the ‘account‘ directly for some reason, so you’ll have to copy paste the above leet address yourself.

Here we also see pretty much nothing except this was created on the 20th of October, which may explain all the attention Loopring has recently gotten with it rising by 3x.

Loopring is a token that behaves kind of like a stock in going up and down with this being one of those rare 2018 ICOs that gets to keep moving again.

The token is used to pay what generally would be called market makers, but here are called ‘ring leaders’ in a decentralized exchange.

The exchange runs on a zk snarks rollup protocol developed by Loopring. This is what we’d call a first generation zk in that it requires a trusted setup with things getting complicated when it comes to circuits.

You need a Powers of Tau ceremony where trusted people, like GME’s CEO Matt Furlong, the chief ape at Supertonk, Joe Biden (if not falling asleep), whoever drafted and shelved the summer report of GME at Gary Gensler, the ‘no more blah blah blah’ girl and maybe the inventor of dogecoin, Jackson Palmer, the intentionally famously unfamous.

Now we don’t know what they do exactly after you got them all together. This is very raw cryptography, mindboggling as Google’s co-founder Sergey Brin called it.

But what we do know is that they’re each given a ‘key’ and as long as one of them destroys theirs, then everything is fine. Or as we were told back in 2019 when this was on the testnet by Alex Gluchowski, a developer at the Ethereum Foundation (EF):

“If ALL AND EVERY of the trusted setup participants collude together, they could fake any proof and steal ETH. If at least one party is honest, everything is fine.”

If there is no other choice, then whatever. Who wouldn’t trust doge. But we thought this thing was long behind us because we have starks now.

Here that percentage increases a bit because their latest audit, albeit eight months ago which is ancient time in this space, has a lot of complaints about them circuits and about tightening up that statement and they didn’t quite get anywhere in the end.

Now that doesn’t mean Loopring is not secure, but to us it is very outdated tech and a tech that we haven’t even thought about in what feels like a very long time because any developer that has a choice between snarks with the uuu and starks, would obviously go with starks.

Loopring prides itself as being the first to use zk-rollups, so why they might be using snarks is understandable because imagine you spent years or months building something and here comes Vitalik saying start again.

But, when there is a choice, this isn’t a protocol that should be used. That said, we’re not advisers, we’re only expressing our opinion here based on the objective facts as we objectively understand them with no indication we could find that they have moved to sTarks.

However, for a company like Gamestop or any company that wants to engage in serious NFT-ing this year rather than two years ago, snarking when you can starking would not be a good start.

There’s ImmutableX. New, because a lot of these technologies are newly in-production and that does come with its own risks in as far as not time tested. Second layers, uses zk-rollups, but starks.

That’s why no one talks about Loopring in this space, but some are talking about ImmutableX because OpenSea might go on it and because it’s either the first or the best known of the sort with it further specializing on NFTs.

dYdX has been using starks in production for a few months and they handle billions in daily volumes. The tech works and astonishingly so with no known criticism as it stands except it hasn’t yet reached the stage where all dapps can stand on one zk, with that in development in what is called Starknet.

Gamestop can try and join them with their NFT project as they attempt to navigate complex new waters in a very fast moving space.