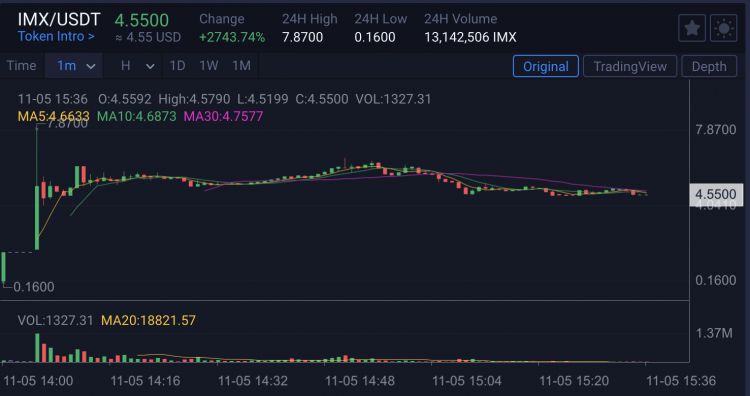 The zk-stark second layer NFT market place, ImmutableX, has began trading with it settling at a price of around $5 on Huobi, the first exchange to list them.

The token reached a high of $15 on OKEx and just above $7 on Huobi, giving it a fully diluted market cap of $11 billion from get go at the current price of circa $5.

That’s not far off from dYdX’s $16 billion and is just half of Uniswap’s $25 billion, with ImmutableX (IMX) having an airdrop too.

That starts being claimable today. Some got 1,200 tokens. Our test-running account got only 4 for some reason, with many others likewise wondering on discourse whether there was a bug as they got just 3 or 4 tokens.

The claim process itself also seems a bit bugy, with it stating the claim failed due to some system error. We were told too many were claiming currently so that’s what’s causing the failure.

For those that got the 1,000 tokens, then this is an A grade airdrop considering the price action, while for those that got 4, it’s a not so funny joke but you can continue to play to earn with rewards given for minting or transferring NFTs on the platform.

The platform uses zk tech, so such actions should be instant and pretty much free, with about 270 million tokens currently in circulation.

They haven’t announced any such plans, but the NFT market is clearly reaching a new stage of development with competition now quite fierce between NFT marketplaces.