Tim Cook Comes Out as a Bitcoiner, is Apple Going Metaverse? 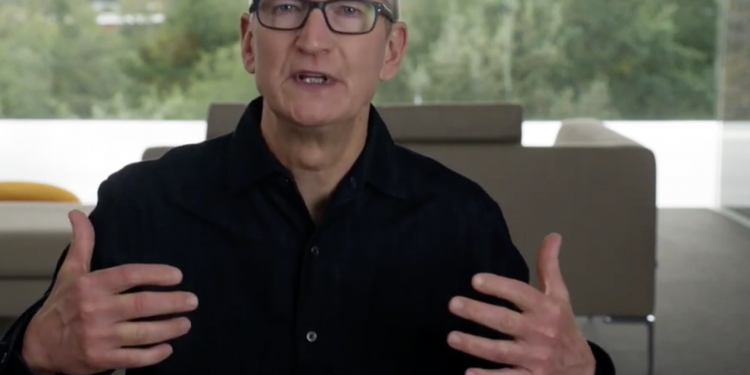 Tim Cook, the Chief Executive Officer of the world’s second biggest company with a market cap of $2.5 trillion, Apple, has come out as a bitcoin holder.

Asked whether he has bitcoin or eth, he said: “I do. I think it’s reasonable to own it as part of a diversified portfolio.”

He didn’t reveal how much he has or what cryptos, but he said he has been interested in cryptocurrencies “for a while.”

“I’ve been researching it and so forth and so I think it’s interesting… it’s something that from a personal point of view I’m interested in.”

He said he wouldn’t put Apple’s cash reserves into bitcoin because he doesn’t think people buy Apple stocks to get exposure to bitcoin, they buy bitcoin directly.

He did however say “there are other things Apple is looking at” in regards to crypto integration, but did not specify what exactly except to exclude it for crypto payments.

One product mentioned was Apple Pay, which has close to 400 million users. Cook said crypto might be integrated into Apple Pay, but there are no immediate plans to do so.

Samsung has previously tried to come up with a blockchain native phone where the phone is both a hardware wallet and also potentially acts as the Metamask itself.

Samsung however came across as if almost embarrassed by it when this first went out in 2019, with the blockchain part of the phone buried deep into the spec brag and almost not mentioned at all during their conference.

Apple could be more serious, but it’s not clear whether such juggernaut can really compete with crypto native startups that do wallets already as well as blockchenizing extensions like Metamask.

They could instead do something with NFTs perhaps. That’s a hot area that traditional companies have embraced, yet we can’t easily see how they can incorporate them within their current products. Unless they’re going metaverse.

The Coming Tech War on the Blockchain

A fundamental compartment of the metaverse is and will be Non-Fungible Tokens (NFTs) or crypto goods as they can also be called.

We’ve seen how it works. You need some bunny ears (that you can wear) to enter some section of the building behind bunny glass doors. What’s behind there is open to imagination, especially when the club is called Playboy.

The first use cases that come to mind are events, or cinema screening etc, but it can also be the digital equivalent of swiping a key to enter part of the office building.

You can do this in a centralized way through username and password, and other code word or number based forms have also been showcased like entering a number combination for some chest of goodies to open.

You can bruteforce a password however, or a code word. You can steal an NFT. For office building areas, does a combination of both double the security with phone authentication as well if we’re getting to that level of secrecy?

Shamir secret sharing in action where you now need three keys to gain access when the maximum before NFTs has been two keys.

For a concert, just an NFT is more convenient than password or phone authentication. As that NFT can also be nice clothes, we’re gradually moving away from the other options to the NFT option, and thus we’re also moving away from it being doable in a centralized way.

Just think how often you have to password in web2. That’s the NFT market for web3, trillions probably, eventually.

Utility NFTs, and this is one use case we have discovered or are experimenting with when NFTs are barely months old in usage, what else will come out of it is to be seen.

Yet, if our analysis is correct that they’ll have no choice but to NFT due to it being a superior and cooler way of authentication, then the next tech war will be fought on the blockchain.

Facebook has made its ambitions clear, but the rest are moving as well. All these one trillion plus companies are doing something related to the metaverse, or looking at it.

They wanted their own blockchain. Sergey Brin of Google talked in 2018 about putting huge resources to mainstream blockchains, giving the example of gmail where they gave 5GB of storage for free back when 5GB was huge. Of Facebook’s blockchaining attempts, we are all aware, with Zuk famously saying in 2018 that the problem with current ones is that you can’t control them.

It would perhaps be brave of us to say they can’t have their own blockchain because a controlled blockchain would lose interoperability and would potentially undermine democratic control over fiat money.

They’ll have to public blockchain so that these tech giants can war and fiercly, but in a level playing ground, in an open platform, like the internet itself.

Zuk talked about metaverse assets needing to be transportable from one metaverse to another, or from one platform to another. That can only be done on a public blockchain. In addition only the public blockchain can provide the required trust in the ownership of such assets and their longevity.

That translates to they’re all blockchaining now, behind closed doors, much still in development, and some in secret with Apple filing for some metaverse patent.

Zuk gave a timeframe of ten years. If we are right that this space is in the internet’s equivalent of the 90s, with the dotcom boom not yet passed, then such timeframe sounds correct.

In the meantime, we’re at the frontier, and as it seems to be happening, the titans are joining too. They’re preparing for battle, with this space the arena.

That’s at least one interpretation of Tim Cook’s comments. They can’t be seen to not be bitcoining anymore, because they might be disrupted by it as the digital economy moves to the blockchain layer.

The big question is whether these corporations will be able to move with sufficient speed to remain relevant as startups undoubtedly rise in a crypto native way.

Of that, there are two relevant names: IBM and Microsoft. IBM never quite recovered from Apple’s assault in the 80s and 90s, with the formerly tech giant now not quite in the public’s imagination anymore.

Microsoft almost became irrelevant too in the 2000s as new startups like Google, Amazon and Facebook dominated the web. Yet now Microsoft is the world’s biggest company at above $2.5 trillion.

That’s a remarkable unnoticed comeback from a company that has been an early adopter of things like blockchain or cloud computing with it managing to reinvigorate itself.

From that we can discern it won’t be an either or. Some giants will fall, some will compete, some startups will rise to become new giants as the foundations of the web and the nature of digital move towards its biggest upgrade yet.