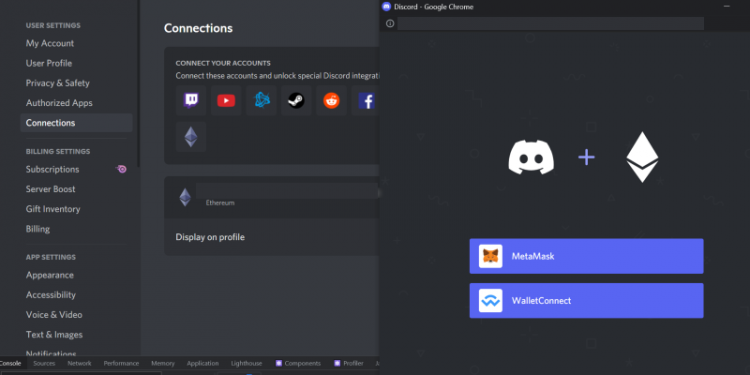 Jason Citron, the co-founder and CEO of Discord has posted a screenshot (pictured) showing a seamless integration of the ethereum network.

Discord users, some 150 million of them, could link their Metamask account to their Discord account, so bringing web3 to this web2 app.

That follows a long ‘what if’ by Packy McCormick, a former investment banker now newslettering for Not Boring.

McCormick suggests in a crypto users survey, Discord implied it might launch a discord native crypto wallet. He argues they should go as far as launching a $Discord token.

In reply, Citron said “probably nothing,” while sharing the above image showing that there is actually something.

However he was brigaded by furries that seem to be into gender critical theory with their argument being bitcoin is a ponzi (that academic papers say you should invest in for diversification) and uses energy (wow, what doesn’t).

One of them then takes off the mask, arguing bitcoin is not the solution. Instead: “What we need to do is overthrow Capitalism.” Well, over our dead bodies.

Citron however caved in to these communists, presumably thinking these subverters are somehow reflective of public opinion, stating:

“Thanks for all the perspectives everyone. We have no current plans to ship this internal concept. For now we’re focused on protecting users from spam, scams and fraud. Web3 has lots of good but also lots of problems we need to work through at our scale. More soon.”

Discord has become the dominant platform for crypto projects, replacing Slack sometime in 2017. It’s a vital tool, especially for us when we need quick information, that sometime turns into grilling for interesting new projects.

It can be a fun place. Many Nitron subscriptions went flying when Convex reached a new high as token holders threw such Nitron in the air in celebration.

But, it’s just IRC really, a circa 30 year old invention, with a lot more needless distraction like dumb gifs. Only innovation there is you can have chans within a project chan or server as they call it.

Crypto needs however have developed considerably since 2017. Decentraland Games for example uses Discord to publicize poker tournament times. You need to ‘tick’ on discord to get a seat on the tournament that happens on the Decentraland metaverse.

You can have a different nick on Discord and a different one in Decentraland. Hence you get a bit of angst when it comes to seating as you have to point that out.

Then, some projects want you to go to Discord to get POAP. Things can get messy here. The Happy Cats POAP NFT that was given out on Discord, for example, never reached our ethereum test-account.

Some projects in addition use NFT or token ownership as a ticket or access key to a specific chan within their project Discord. Kind of the premium room.

All of this currently is very messy. Some use third service providers that try and bridge the blockchain with Discord, but that raises potential security concerns especially as a lot of these projects are new, requiring some research at the very least. So increasing barriers.

A lot of it would be simplified with this simple integration where you link your Metamask account with your Discord. Projects then can drop NFTs or tokens on their own project Discord, opening up new capabilities.

This pre-release therefore makes sense and is based on market demand, rather than Discord pushing something.

In addition those that don’t want to use it, don’t have to use it as these communists are not being forced to go on ethereum or to link their account. So it’s not clear what their problem is exactly except equal authoritarianism for all. While those that want to blockchain and Discord can do it more conveniently.

Citron however is seemingly giving priority to some fringe ideologues that have no clue about tech or finance, over those building and doing stuff. Instead of standing up for that very capitalism that has given him the opportunity to innovate and thrive.

But, the market gets what it wants. If not at Discord, then at Content, which can have blockchain and NFTs and the partying like it’s 1999. So something like this is probably coming.